Bounded Control of the Kuramoto-Sivashinsky equation 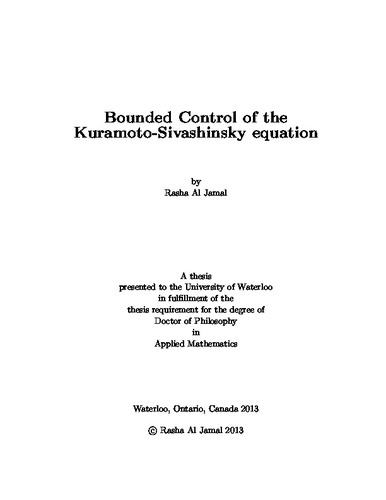 Feedback control is used in almost every aspect of modern life and is essential in almost all engineering systems. Since no mathematical model is perfect and disturbances occur frequently, feedback is required. The design of a feedback control has been widely investigated in finite-dimensional space. However, many systems of interest, such as fluid flow and large structural vibrations are described by nonlinear partial differential equations and their state evolves on an infinite-dimensional Hilbert space. Developing controller design methods for nonlinear infinite-dimensional systems is not trivial. The objectives of this thesis are divided into multiple tasks. First, the well-posedness of some classes of nonlinear partial differential equations defined on a Hilbert space are investigated. The following nonlinear affine system defined on the Hilbert space H is considered z ̇(t)=F(z(t))+Bu(t), t≥0 z (0) = z0, where z(t) ∈ H is the state vector and z0 is the initial condition. The vector u(t) ∈ U, where U is a Hilbert space, is a state-feedback control. The nonlinear operator F : D ⊂ H → H is densely defined in H and the linear operator B : U → H is a linear bounded operator. Conditions for the closed-loop system to have a unique solution in the Hilbert space H are given. Next, finding a single bounded state-feedback control for nonlinear partial differential equations is discussed. In particular, Lyapunov-indirect method is considered to control nonlinear infinite-dimensional systems and conditions on when this method achieves the goal of local asymptotic stabilization of the nonlinear infinite-dimensional system are given. The Kuramoto-Sivashinsky (KS) equation defined in the Hilbert space L2(−π,π) with periodic boundary conditions is considered. ∂z/∂t =−ν∂4z/∂x4 −∂2z/∂x2 −z∂z/∂x, t≥0 z (0) = z0 (x) , where the instability parameter ν > 0. The KS equation is a nonlinear partial differential equation that is first-order in time and fourth-order in space. It models reaction-diffusion systems and is related to various pattern formation phenomena where turbulence or chaos appear. For instance, it models long wave motions of a liquid film over a vertical plane. When the instability parameter ν < 1, this equation becomes unstable. This is shown by analyzing the stability of the linearized system and showing that the nonlinear C0- semigroup corresponding to the nonlinear KS equation is Fr ́echet differentiable. There are a number of papers establishing the stabilization of this equation via boundary control. In this thesis, we consider distributed control with a single bounded feedback control for the KS equation with periodic boundary conditions. First, it is shown that sta- bilizing the linearized KS equation implies local asymptotical stability of the nonlinear KS equation. This is done by establishing Fr ́echet differentiability of the associated nonlinear C0-semigroup and showing that it is equal to the linear C0-semigroup generated by the linearization of the equation. Next, a single state-feedback control that locally asymptot- ically stabilizes the KS equation is constructed. The same approach to stabilize the KS equation from one equilibrium point to another is used. Finally, the solution of the uncontrolled/state-feedback controlled KS equation is ap- proximated numerically. This is done using the Galerkin projection method to approximate infinite-dimensional systems. The numerical simulations indicate that the proposed Lyapunov-indirect method works in stabilizing the KS equation to a desired state. Moreover, the same approach can be used to stabilize the KS equation from one constant equilibrium state to another.