Life of the Woods: A Study of Emily Dickinson 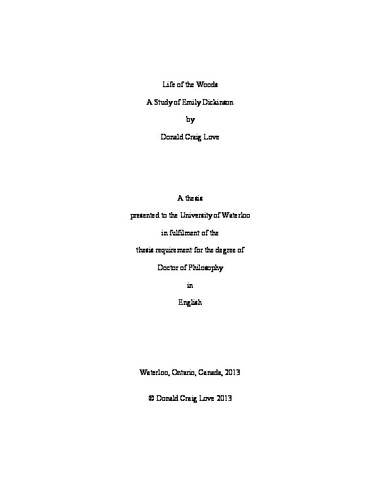 Beginning with T.W. Higginson, the poet’s first public critic and posthumous editor, the prevailing view of Emily Dickinson has been of a maker of “wonderful strokes and felicities, and yet an incomplete and unsatisfactory whole,” a view that is often based on her perceived strangeness as a person. More recently, Virginia Jackson has advanced the view of Dickinson’s poetry as being poorly served by modern methods of practical criticism, “dependent on their artifactual contexts” and on thoughts “too intimate for print.” Unabashedly practical in its approach, this thesis argues that the general shape of Dickinson’s life reveals her writings as the product of her personal quest for growth, and that, further, her reclusive habits reflect this quest. Dickinson’s removal from the ordinary modes of life in her town parallels Henry David Thoreau’s more transient life in the woods. No less than Thoreau, Dickinson wished “to live deliberately, to front only the essential facts of life,” but the combined pressures of gender and social situation placed restrictions on how Dickinson might do so as a woman. Yet while she did not take up an abode in the woods, Dickinson’s home life enabled her to live in the manner of the woods—a symbol of inexhaustible diversity in the poet’s imagination, and an endless source of significance beyond her conscious will. The title of the study hints at the mode of life the poet associates with this uncharted, enchanted place. The Introduction uses Dickinson’s early letters to Higginson to trace out her project as a poet in light of mid-nineteenth century critical principles. It shows how the poet repeatedly draws a distinction between herself as a person and herself as a poet, and how the theory of organic form which was dominant in her time helps to clarify her aesthetic achievements, while it also offers an explanation of why she never sought to publish her works. The main argument of this thesis is composed of two parts. Part I is composed of three chapters, all of which concern challenges posed by Dickinson’s writing. The first chapter considers several significant aspects of Dickinson’s autograph manuscripts, rejecting the materialist theories of some recent writers on the subject while also considering what the manuscripts tell us about the poet on the page. The second and third chapters explore the main purpose of Dickinson’s non-verbal notation, her use of non-standard conventions of orthography and punctuation (including capitalisation), and also her use of line breaks. Part II is also composed of three chapters, each of which focuses on distinct topics to offer new perspectives on Dickinson’s poems. The fourth chapter examines several poems in light of the tradition of natural visionary wisdom that flourished in New England in Dickinson’s time. The fifth chapter applies the literary conception of paradox to several of Dickinson’s more challenging poems, showing how the mode of paradox allows her to grasp the fuller sense of experience. The subject of the last chapter is death, immortality, and the “Immortality” the poet associates with enchanted earthly experience. The Conclusion describes an important function of Dickinson’s poetry—it offers to make us conscious of what is strange, wonderful, and unknowable in the world. A few prospects for the next stage of the study are also described.