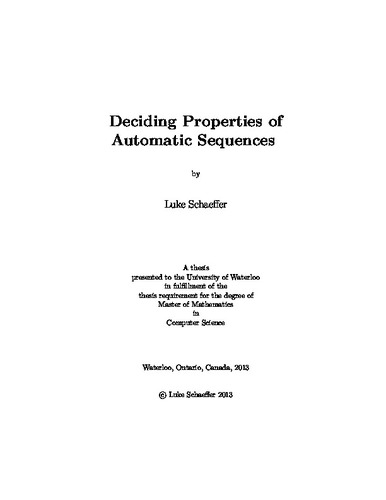 In this thesis, we show that several natural questions about automatic sequences can be expressed as logical predicates and then decided mechanically. We extend known results in this area to broader classes of sequences (e.g., paperfolding words), introduce new operations that extend the space of possible queries, and show how to process the results. We begin with the fundamental concepts and problems related to automatic sequences, and the corresponding numeration systems. Building on that foundation, we discuss the general logical framework that formalizes the questions we can mechanically answer. We start with a ﬁrst-order logical theory, and then extend it with additional predicates and operations. Then we explain a slightly different technique that works on a monadic second- order theory, but show that it is ultimately subsumed by an extension of the ﬁrst-order theory. Next, we give two applications: critical exponent and paperfolding words. In the critical exponent example, we mechanically construct an automaton that describes a set of rational numbers related to a given automatic sequence. Then we give a polynomial-time algorithm to compute the supremum of this rational set, allowing us to compute the critical exponent and many similar quantities. In the paperfolding example, we extend our mechanical procedure to the paperfolding words, an uncountably inﬁnite collection of inﬁnite words. In the following chapter, we address abelian and additive problems on automatic sequences. We give an example of a natural predicate which is provably inexpressible in our ﬁrst-order theory, and discuss alternate methods for solving abelian and additive problems on automatic sequences. We close with a chapter of open problems, drawn from the earlier chapters.