A neurocomputational model of the mammalian fear conditioning circuit 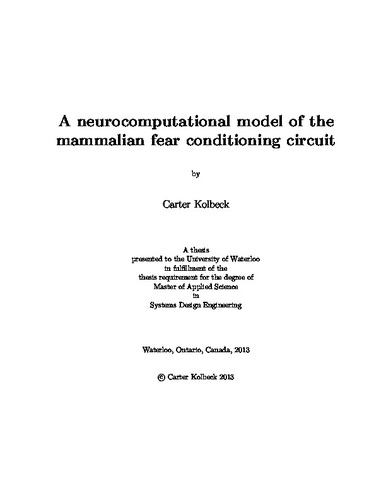 In this thesis, I present a computational neural model that reproduces the high-level behavioural results of well-known fear conditioning experiments: first-order conditioning, second-order conditioning, sensory preconditioning, context conditioning, blocking, first-order extinction and renewal (AAB, ABC, ABA), and extinction and renewal after second-order conditioning and sensory preconditioning. The simulated neural populations used to account for the behaviour observed in these experiments correspond to known anatomical regions of the mammalian brain. Parts of the amygdala, periaqueductal gray, cortex and thalamus, and hippocampus are included and are connected to each other in a biologically plausible manner. The model was built using the principles of the Neural Engineering Framework (NEF): a mathematical framework that allows information to be encoded and manipulated in populations of neurons. Each population represents information via the spiking activity of simulated neurons, and is connected to one or more other populations; these connections allow computations to be performed on the information being represented. By specifying which populations are connected to which, and what functions these connections perform, I developed an information processing system that behaves analogously to the fear conditioning circuit in the brain.