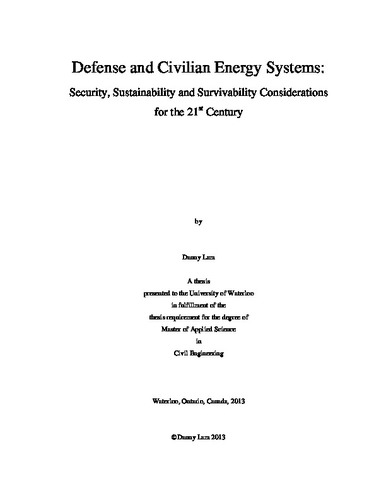 The United States and NATO Allies have a national security problem that is the product of America being the home of inexpensive and plentiful modern energy. A century of cheap and plentiful domestic supplies of oil has resulted in the architecture of civilian and military systems that are premised on the continued availability of cheap, high gradient conventional energy. As the pre-eminent military power of the last century, America ensured that access to secure “rear” areas, bases and supply lines can be relied on – at least until recently. With the increasing prevalence of asymmetric warfare conducted primarily with non-state actors and the loss of America’s monopoly on precision munitions (PGMs), or in the event of conflict with peer competitor states, security of supply lines, staging and rear areas can no longer be taken for granted. For expeditionary forces, supply of conventional liquid fuels represents a sizable amount of tonnage required to transport combat units to battle and conduct operations. Supplies are primarily conveyed by inherently vulnerable platforms like tankers and stockpiled in difficult to harden warehouses or dumps. While there is no shortage of petroleum or conventional fossil energy worldwide, the sheer volume of fuel presently needed to conduct modern expeditionary military operations itself creates vulnerabilities. The DoD and individual services have in place long-term programs to reduce the energy intensity with valuable lessons for NATO allies as most military systems and doctrine are patterned after DoD architectures. Transfer of techniques for reducing energy intensity from defense to the civilian sector has spinoff benefits overall; for example, by making operations in remote locations such as the Arctic / Antarctic more affordable and practical, and enabling a more energy / resource efficient civilian economy. Benefits from reduction of energy use include the reduction of signatures from energy use that are expensive and difficult to mask or hide, potentially reducing vulnerabilities in both the military and civilian infrastructure. Despite these benefits, legacy systems architectures in both defense and civilian limit energy efficiency gains. Technological advances of the past century have enabled many functions such as HVAC and lighting to be met with low gradient, low density and intermittent energy if systems are re-architectured. New designs, if standardized and rolled out quickly, offer the potential to benefit from making use of renewables like solar, wind, micro-hydro, or to use conventional high gradient energy more efficiently in combined cycle systems that often can be locally sourced even for remote forward operating bases. Low gradient energy systems, by their nature, present a smaller emissions signature issue. US-DoD has an opportunity to drive the development of the implementation of these high efficiency technologies and institutions and accelerate their spread to the civilian economy. This thesis presents a vision of a technically, politically, economically and logistically viable pathway to a cleaner and more sustainable alternative to current dominant energy systems architecture and provides a roadmap to implementation