What makes a few more than a lot: a study of context-dependent quantifiers 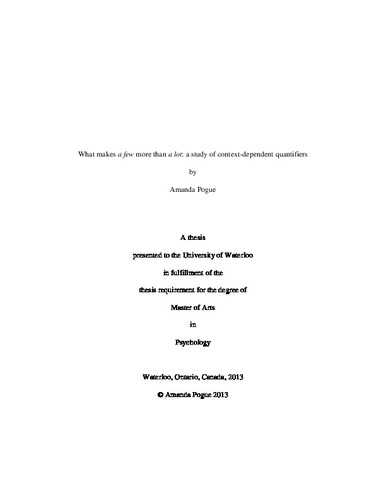 “Hey can you help me move? I warn you I have a lot of books, though.” When we interpret such sentences we might assume that our friend is implying that there will be some heavy lifting, because she own “a lot of books”. If you’re opposed to heavy lifting, you probably want to know how many books your friend wants you to help her move. While it is easy to determine the quantities picked out by numerals, discovering the meaning of quantifiers, such as “a lot”, is less clear. For example, in a survey people gave different quantities for “a few” and “a lot” depending on the context they were asked about, choosing to give quantities as high as 76 for “a few friends on Facebook” and as low as 4 for “a lot of houses”. I ask what role context plays in these interpretations, and propose two possible hypotheses: the Fixed Quantities Hypothesis, and the Relative Quantities Hypothesis. The Fixed Quantities Hypothesis assumes that these terms pick out an exact range of quantities (e.g., 3-5 for “a few”) and that the effect of context is due to people being pragmatically generous in their interpretations (Leech, 1983; Brown & Levinson, 1987; Lasersohn, 1999). The Relative Quantities Hypothesis instead argues that the ranges picked out by each of the terms is relative to the context, and therefore these terms might be similar to relative gradable adjectives (e.g., the meaning of the word “tall” is dependent on the reference set, e.g., what counts as “tall” is different for a mug versus a building; Kennedy, 2007; Syrett, Kennedy, & Lidz, 2010). I attempt to tease apart these two theories by looking at whether people find certain quantities implausible for some contexts leading them to think a speaker is being sloppy (Experiment 1), whether the context effect persists even under light-to-no pragmatic pressure (Experiment 2), and whether we find the effect of context even with minimal knowledge of novel contexts (Experiment 3). The results favour the Relative Quantities Hypothesis, and I discuss potential future work investigating the role of distributional knowledge on quantifier mappings.