Emphasize the Gap! Towards a Žižekian Definition of Critical-Emancipatory Architecture 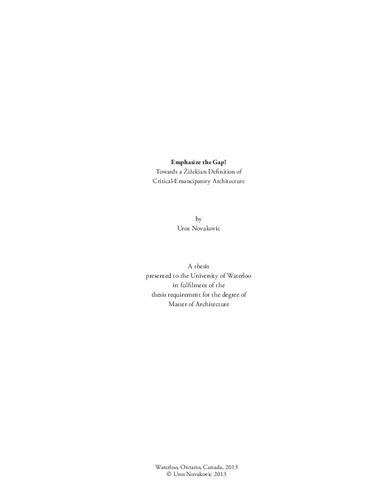 Confronted with issues, whose (socioeconomic) causes cannot be resolved through the modification of the built environment, architectural interventions may often inadvertently aid the reproduction of the problems they seek to resolve. In eliminating symptoms of social inequality, alienation and marginalization, architecture can legitimize the social order out of which they arise. In such situations, architects’ attempts to concern themselves with narrowly practical concerns are insufficient even to their own aims, and in order to properly address the issues facing it, architecture must simultaneously operate as a vehicle for social critique and political emancipation. In the work of philosopher Slavoj Žižek, a critical-emancipatory intervention corresponds to an emphasis of a constitutive tension and discord (“the gap”) within what is commonly perceived as a stable, neutral background. Critique strives not to explicitly reveal existing problems. Instead, it reveals an inherent inconsistency within an implicit, ideological fantasy of order and harmony that allows us to naturalize these problems. Consequently, the critical-emancipatory potential of architecture resides not in its programmatic content nor in its representational image, but in its capacity to disrupt the reassuring affective texture of ideology. Critique resides in a formally subtle (concerning architecture in its narrowest definition as an affective structure), yet politically radical shift in how problems of everyday life are interpreted and processed; re-introducing a minimal sense of disquietude that is both critical and emancipatory. The disquietude, that marks an absence of a fantasy of order and harmony, can, paradoxically, only be sustained as a product of a formally (representationally) ordered and harmonious appearance. The critical-emancipatory disquietude is not a compromise of the order and harmony, but rather a reflection of its uncompromisingly egalitarian nature.