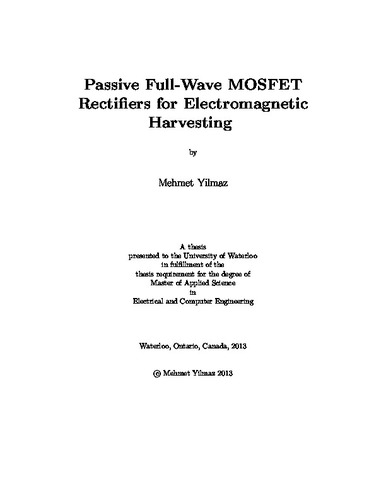 A new generation of electronic devices has emerged requiring micro-watt-level power supply to operate. Thanks to micro-power processors and sensors, micro-power sources have become an attractive option for industry and research. This work is interested in micro-power sources that harvest vibrational energy by deploying electrostatic, electromagnetic, and piezoelectric transduction techniques. The output power of vibrational energy harvesters is in AC form, whereas electronic loads require known DC power supply to operate. Thus, there is a need for AC-DC conversion between harvesters and electronic loads to get DC power out of AC. Traditional full-wave bridge rectifiers and center-tapped transformer rectifiers are not feasible in micro-watt-level harvesters. Low output power undermines the power efficiency of those traditional rectifiers. Thus, novel, low power, high efficiency conversion circuits are required instead of traditional rectifiers. This goal is particularly challenging when it comes to electromagnetic energy harvesters since their output voltage is much lower than that of electrostatic and piezoelectric harvesters. In this work, we studied four different full-wave rectifiers; a silicon diode bridge rectifier, a Schottky diode bridge rectifier, a passive MOSFET rectifier, an an active MOSFET rectifier. Out of simulation results, we found the voltage and power efficiency of each rectifier. We found that MOSFET-type rectifiers are better than diode type rectifiers in terms of voltage and power efficiency. Both full-wave MOSFET rectifiers have about 99% voltage and power efficiency. There is only a small difference in power and voltage efficiency between the two MOSFET rectifier types below 600mV input voltage amplitude. Since active MOSFET rectifier has extra components and need of external DC supply to power its active devices, we concluded it was not good option for small scale harvester systems. We implemented the passive MOSFET rectifier, tested its performance in rectifying the output of an electromagnetic harvester, and analyzed its effects on the harvester performance. When we connected the MOSFET rectifier to the harvester it doubled the optimum load resistance from 24 Ohm to 48 Ohm. We also studied the rectifier effect on harvester's natural frequency, and it does not change much the natural frequency which means our rectifier acts like resistance, and we also calculated the power efficiency based on harvester test and we have maximum 74% power efficiency.