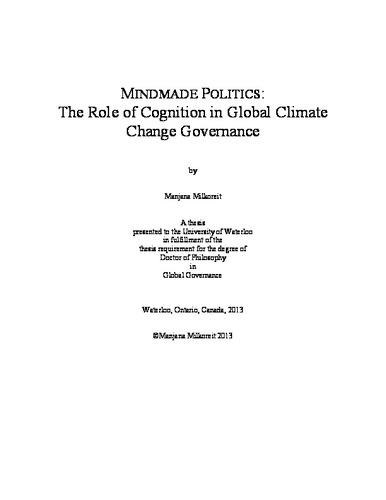 This dissertation explores the role of cognition—the elements, structures and processes of individual and collective thought—in finding effective, cooperative solutions to climate change. It makes three contributions—theoretical, empirical, and methodological—to international relations scholarship. First, it explores cognition as a significant variable in international political life, developing an analytical framework that not only links a cognitive framework of analysis to major IR theories but bridges current theoretical divides between rationalism and constructivism. Second, by identifying and visualizing current belief systems of participants in global climate negotiations, the thesis offers insights regarding cognitive obstacles to multilateral cooperation. The most important obstacle is a clash of substantively and emotionally different belief systems. Depending on the specific constellation of a person’s beliefs about collective identity, perceptions of climate-change threat, and associated emotions, some belief systems contain normative beliefs about justice (i.e., a dominant logic of appropriateness), while others do not. The latter belief systems reflect the national-interest logic of consequences. Focusing in particular on the “wicked” characteristics of climate change, the analysis further reveals a neglect of scientific knowledge (in particular knowledge of the possibility of climate tipping points), a serious under-valuation of the distant future, and perceptions of a number of constraints on agency, some of which cannot be resolved within the negotiations. The study also identifies six distinct belief systems among climate negotiators, which I label The International Community, A Minilateral Club, The Market, Individuals, The Developed World, and The Irresponsible West. The key element distinguishing these belief systems is actor type, which affects problem definitions, proposed solutions, political strategies, and more generally an actor’s role in global climate governance. Third, this dissertation expands the methodological toolbox available to IR scholars by demonstrating the value and synergistic power of cognitive-affective mapping and Q Method. These are powerful tools to reveal individual and collective belief systems respectively.