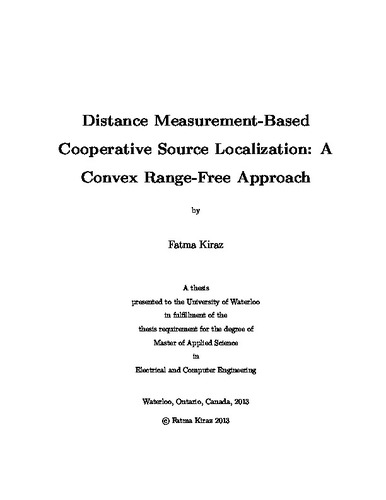 One of the most essential objectives in WSNs is to determine the spatial coordinates of a source or a sensor node having information. In this study, the problem of range measurement-based localization of a signal source or a sensor is revisited. The main challenge of the problem results from the non-convexity associated with range measurements calculated using the distances from the set of nodes with known positions to a xed sen- sor node. Such measurements corresponding to certain distances are non-convex in two and three dimensions. Attempts recently proposed in the literature to eliminate the non- convexity approach the problem as a non-convex geometric minimization problem, using techniques to handle the non-convexity. This study proposes a new fuzzy range-free sensor localization method. The method suggests using some notions of Euclidean geometry to convert the problem into a convex geometric problem. The convex equivalent problem is built using convex fuzzy sets, thus avoiding multiple stable local minima issues, then a gradient based localization algorithm is chosen to solve the problem. Next, the proposed algorithm is simulated considering various scenarios, including the number of available source nodes, fuzzi cation level, and area coverage. The results are compared with an algorithm having similar fuzzy logic settings. Also, the behaviour of both algorithms with noisy measurements are discussed. Finally, future extensions of the algorithm are suggested, along with some guidelines.