Paleoglaciological dynamics in northern Manitoba and the subglacial bed mosaic 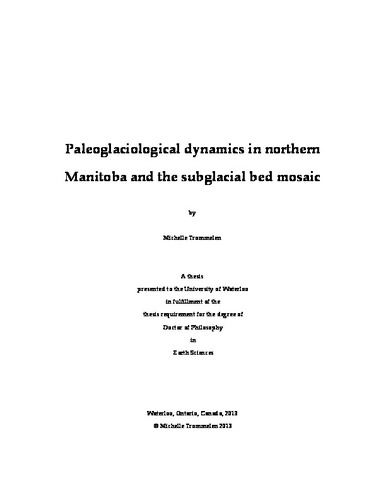 During the last glacial maximum (LGM), some 20 ka ago, northern Manitoba was situated beneath 3 to 4.5 km of ice, on the outer fringe of a major ice spreading center of the Laurentide Ice Sheet. The region has also been affected by major paleoglaciological changes linked to multiple source areas, migration of ice centres, and ice-sheet thickening/thinning over multiple glacial cycles. The net effect of this evolution is a very complex geological record, which has major implications for ice-sheet reconstructions and drift prospecting. Theory-based hypothesis for the region suggest initial advance-phase deposition was followed by either net-erosive or cold-based conditions for much of the glacial cycle. In contrast, observation-based reconstructions of ice-sheet behaviour consider the glacial landscape to have been predominately formed by near-complete overprinting during warm-based deglaciation. Some complexity has been recognized in sediment-landform records, but new insights into glacial dynamics and sediment-landscape evolution are needed. Systematic mapping (remote-sensing) and fieldwork (ice-flow indicators, till composition, ground truthing) in northeastern Manitoba has led to the recognition of spatio-temporal variability in landscape (streamlined-landform event-flowsets) and landform (micro and meso-scale ice-flow indicator records) and till composition inheritance. In particular, analysis of the spatio-temporal characteristics of the subglacial landscape led to the recognition of disjoint zones with internally-consistent assembly histories – termed glacial terrain zones (GTZ). These GTZ were then classified as (1) relict-glacial, (2) palimpsest, or (3) deglacial in nature. Generally, (1) is interpreted as pre-LGM, (2) may include pre-LGM terrain but also LGM to early deglaciation (ice margin still far from study area; ice sheet thinning phase) and (3) was formed during the final ice retreat phase. The resultant surface till composition within relict and palimpsest GTZs is a spatial mosaic interpreted to reflect variable intensities in modification (overprinting) and preservation (inheritance) of a predominately pre-deglacial till sheet. In these regions, streamlined landforms parallel to a known deglacial ice-flow orientation were unable to overprint the underlying inherited glacial sediment composition. Secondly, field investigations (sedimentology, clast fabrics, till composition, near-surface S-wave seismic surveys) have characterized the widespread Rogen moraine terrain. These transverse subglacial ridges are spatially associated with streamlined landforms, are situated on regionally low-lying terrain without topographic constraints and may have small bedrock ‘knob’ obstacles at their up-ice base. This thesis assesses Rogen moraine formation hypotheses within the new paleoglaciologic context of northern Manitoba, favours an instability mechanism for formation, and provides important field data against which further formation hypothesis should be tested. The main insight of this study is not a detailed reconstruction (local history), but rather a series of forms of evidence suggesting that the glacial history of the region is one of prevailing patchy low-erosion conditions which favored preservation of a fragmentary record of non-coeval and sometimes contrasting warm-based (more dynamic) conditions. Despite being near a thick inner-core region of the Laurentide Ice Sheet, where basal conditions are generally considered stable and meltwater availability is low, the hard-bed study area was subject to local spatio-temporal shifts in subglacial conditions that led to generation of a complex palimpsest glacial landscape. Spatial differences in the preservation of older streamlined landforms, variably drumlinized Rogen moraine and the concentrations of inherited subglacial detritus all culminate in a hypothesis that suggests the subglacial landscape was continually evolving and subject to spatio-temporal variations in the intensity of ice-bed processes throughout the last glaciation (subglacial bed mosaic). Based on the new glacial history, and a general lack of ice-marginal landsystems, most warm-based ice-flow phases likely occurred near LGM – with only weak overprinting during late deglaciation. The idea of landform generation at patches within a transient subglacial bed mosaic now allows for a close association between subglacial drumlins and Rogen moraine ridges, that may have formed by disconnected and not necessarily coeval or related processes. This mosaic, of slow to non-flowing basal ice (‘sticky regions’) and wet-based flowing-ice patches, also helps to explain preservation of immature landforms (Rogen moraine) and relict or palimpsest terrain. Sticky regions may have formed by at least two different mechanisms: localized heterogeneous switches in basal thermal regime (frozen-bed patches), or within a warm-based subglacial environment from wet to stiff, dewatered till.