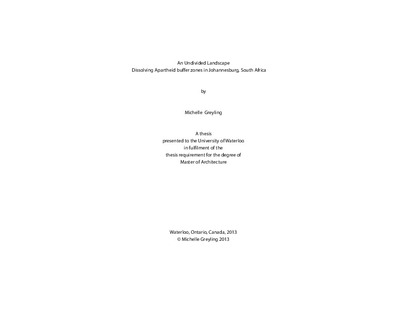 Progressive spatial segregation of Whites from other ethnic races in South Africa started in 1886. Apartheid rulers evicted three and a half million Blacks, Coloureds and Indians from white urban and residential areas between 1904 and 1994. Apartheid planners used natural, mining, industrial, and infrastructural buffer zones to spatially enforce segregation. They based their apartheid spatial governance on separation and control and not on urban development. Today remnants of apartheid remain deeply embedded in the urban framework, where large buffer zones continue to enforce segregation and disrupt economic growth. Victims of apartheid legislation believed the eradication of apartheid in 1994 meant the right to live in the city and the end of forced evictions. Since then the post-Apartheid government has conducted 2 million evictions, reminiscent of the 3.5 million evictions during the apartheid years. In an attempt to make Johannesburg a `world class city`, the municipality forcefully removed the poor from the city, and relocated them to rural locations where their livelihoods are severely challenged. To many, a new ``apartheid` has been born; one that segregates the rich and the poor. The government has released several strategies to provide land for the poor near the city, but the high cost of land in urban areas has disrupted implementation. The thesis proposes a three-fold strategic design intervention to provide land for the poor near the city and dissolve the apartheid-designed buffer zone between Soweto and Johannesburg. The site, a landmark from the apartheid spatial legacy and part of the Witwatersrand gold mining belt, separates Soweto, home to four million Blacks, from the city of Johannesburg. About one and a half million people commute to the city each day passing by the 14 km stretch of this toxic mining land. The thesis proposes three urban design strategies to transform the site into a community, which the local people would build: Remediation strategies to address the toxic mining landscape, infrastructural strategies to provide basic services and economic strategies to promote economic growth. These strategies operate in a codependent structure. Co-op centres implement these strategies, transfering strategy technologies to the local community.