Change in International System: a Comparative Study of Hierarchic and Anarchic Systems 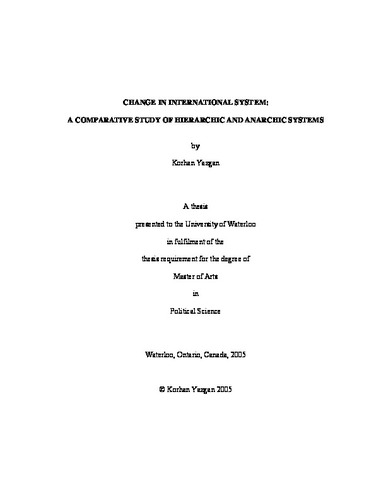 This thesis focuses on change and persistence of the structure of the international system. It attempts to address the question why hierarchic structures prevailed during the Ancient and Classical eras (3000 B. C. ? 1500 A. D. ). The thesis compares and contrasts the Roman Empire (the Pax Romana period 1st century B. C. -3rd century A. D. ) and the Chinese Empire (the T?ang Dynasty 618-907 A. D. ) as hierarchic structures and the multi-state system of ancient Greece (8th-4th century B. C. ) and the multi-state system of ancient China (The Spring and Autumn and the Warring States Period 722-221 B. C. ) as anarchic structures. The thesis suggests that the moral purpose of the state, the competitive security environment, the desire for benefits and geopolitical and strategic advantages played the major role in the immediate transformation from anarchy to hierarchy. The thesis asserts that the generation of common goods, the decline in transaction costs and the success in securing the commitment of the members and the legitimacy of the system enabled and encouraged the persistence of hierarchic structures. It also re-emphasizes that whereas the persistence of hierarchic systems depends on the existence of several factors, only one factor can promote the persistence of anarchic structures e. g. the moral purpose of the state.