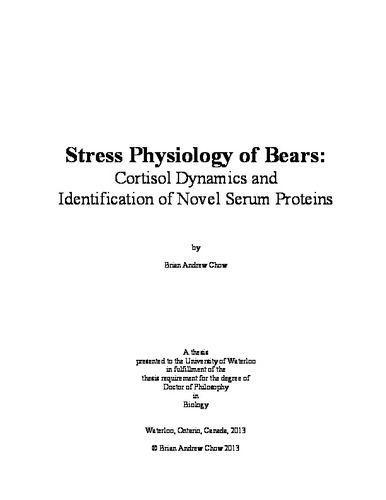 There is a need to understand how free-ranging animals respond and adapt to stress. However, little is currently known regarding the physiologic adaptations to stress in bears, and there are few tools available to wildlife managers to assess the health and stress status of free-ranging animals, including ursids. The hypothalamus-pituitary-adrenal (HPA) axis plays major roles in the physiological adaptation to stress, leading to the increased secretion of glucocorticoids (e.g. cortisol in most mammals) that mediate adaptive changes in physiology and behaviour. The vast majority of glucocorticoids are bound to its primary carrier protein, corticosteroid-binding globulin (CBG), in most animals, and only the unbound fraction is bioavailable. Thus, CBG plays a major role in modulating glucocorticoid dynamics, and this protein must be characterized to build a more complete understanding of the adaptive role that the HPA axis plays in mitigating stress in bears. The overall objective of this thesis was to characterize the HPA axis activity and CBG levels in bears, and develop tools targeted towards the monitoring of the health and stress status of American black bear (Ursus americanus), grizzly bear (U. arctos), and polar bear (U. maritimus). The binding characteristics of cortisol to CBG in bears were studied via saturation binding experiments, and this information was used to estimate free cortisol concentrations based on CBG concentrations. To quantify CBG concentrations in bears, an enzyme-linked immunosorbent assay (ELISA) was developed. Grizzly bear CBG cDNA was cloned and sequenced, and an antibody was developed against a peptide sequence of the deduced amino acid sequence. The antibody showed good cross-reactivity against black, grizzly, and polar bear CBG, and the ELISA based on this antibody found differences in the mean CBG levels between species. Using this data, free cortisol levels were estimated, and mean levels were elevated in polar bears relative to black and grizzly bears. Having developed these tools, the roles that corticosteroid-binding globulin (CBG) and bioavailable cortisol played in the physiological adaptation to major life history traits and environmental challenges faced by ursids were investigated. Importantly, CBG was not modulated by the acute stress of capture and handling, despite the large differences in the magnitude of acute cortisol responses that are induced by these methods, suggesting that CBG levels may reflect the chronic health and stress status of bears. Altogether, there were few changes in CBG levels throughout much of the annual life cycle of bears, implying that CBG does not play a major adaptive role in the life history traits of bears and, instead, metabolic and environmental factors may be the key modulators of cortisol dynamics. However, CBG was not significantly associated with our measures of dietary patterns and nutrition, including body condition, seasonal dietary patterns, and fasting. The majority of the observed variation in the levels of this protein in bears remains unexplained. However, stress-induced free cortisol levels were negatively associated with urea to creatinine ratio (an indicator of dietary protein content and fasting status in grizzly and polar bears, respectively) and positively associated with lactation in hibernating black bears, suggesting that the variation in adrenal function may be playing an important role in the adaptation to adverse environmental conditions and/or metabolic stress in bears. In addition to serum cortisol dynamics, other proteins were also hypothesized to play adaptive roles in maintaining the hibernating phenotype in bears. Changes in the serum proteome during hibernation in black bears were assessed as a means to discover novel proteins that may be indicative of metabolic stress in bears. The serum proteomes of active and hibernating black bears were compared and analyzed for significant changes by two-dimensional electrophoresis and tandem mass spectrometry. Proteins involved with immune-related function were significantly altered during hibernation, leading to the proposal that the serum protein changes are essential for maintaining immune competence, wound healing, and bone structure. Altogether, this thesis developed a method to quantify CBG and estimated free cortisol concentrations in bears, and characterized their roles in the physiological adaptations associated with the major life history traits and environmental challenges faced by ursids. Also, novel serum proteins were identified as potential markers of immune function and health status in bears. These tools may be tremendously useful for wildlife managers and conservationists in determining how chronic stressors, including anthropogenic activities and climate change, may impact the stress and health performances of individual and populations of free-ranging bears.