Fen restoration on a bog cut down to sedge peat: A hydrological assessment of rewetting and the impact of a subsurface gyttja layer 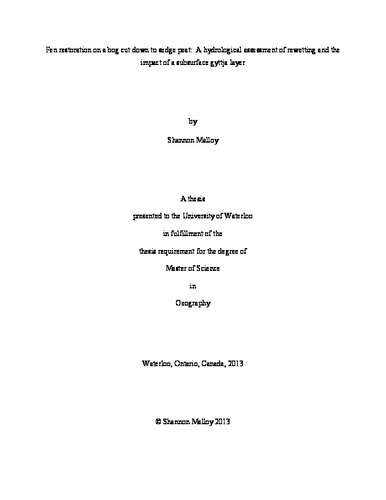 Vacuum harvested peatlands do not easily regain their hydrological function after peat production therefore restoration is required to create hydrological conditions appropriate for the growth of peat producing fen plant species. Peat extraction at Bic-Saint-Fabien peatland by the block-cut method began in 1946, converted to vacuum harvesting in the early 1970’s and ceased in 2000. After exploitation, about 0.04-1 m of residual minerotrophic sedge peat remained; therefore Bic-Saint-Fabien was restored as a fen. Research occurred in 2008-2011 and restoration began fall 2009 so we have two pre-restoration and two post-restoration study years. Rewetting consisted of blocking active drainage ditches, contouring the peat surface into level terraces to even out elevation differences, and building peat ridges (bunds) to retain runoff. Vegetation was introduced to some recontoured parts of the site by the surface layer transfer method. A straw mulch treatment was applied to minimize evapotranspiration. A water budget was created for the harvested cutover area and an adjacent undisturbed section of Bic-Saint- Fabien for all study years. Data collection for the water budget occurred June 2-August 7 (day of year 153-219). Water table, volumetric soil moisture content and soil-water pressure were also examined to better understand the impact of reconfiguration on the hydrology of the system. A 1-1.5 m thick layer of gyttja (a low permeability, high porosity lake-bed sediment) underlies the residual peat; it was parameterized and assessed to see if it could potentially compress and supply water to the overlying peat when the system is stressed. In 2011, the volumetric moisture content and thickness of gyttja were monitored in the field to estimate the strain placed on the gyttja by seasonal water table variability. Gyttja samples were collected and brought back to the laboratory for parameterization and compressibility tests. A water budget was completed annually for the cutover and undisturbed areas of the peatland. There were no distinguishable differences between study years except that 2008 and 2009 were climatologically wetter. During the water budget period surface and groundwater run-on into the cutover area were negligible making precipitation the principle water input. The dominant water loss from the cutover area was evapotranspiration since runoff was only 2 and 9 mm in 2010 and 2011, respectively. Rewetting did not result in a uniform wetness across the cutover site chiefly due to local differences in peat surface elevation. An interior section of Bic- Saint-Fabien remained saturated for nearly all of 2011; it had mean seasonal water table of +2.8 cm, and volumetric soil moisture content and soil-water pressure, 5 cm below the peat surface were 86% and +4 mbar. At a peripheral section (~100 m away) the values were -14.4 cm, 67% and -13 mbar, respectively. While the interior was generally wetter than the peripheral regions, there were some exceptions, notably near where dams were installed on peripheral drainage ditches. The markedly different spatial patterns of wetness suggests that a uniform prescription regarding vegetation re-establishment in the rewetted section may not be warranted. The bulk density, particle density and porosity of gyttja averaged 0.12 g cm-3 1.57g cm-3 and 92%, in the top 40 cm of the layer. The organic matter content of gyttja decreased with depth from about 70% at a 5 cm depth to 45% at a 45 cm depth. Laboratory compression tests showed 9 and 72% strain at effective stresses of 3.5 and 200 kPa, respectively, demonstrating the potential for releasing water upon compression, which in the field is caused by water table lowering. From day of year 192 to 202 in 2011, when a ~8 cm water level change occurred (effective stress range ~0.8 kPa), the volumetric moisture content and thickness of the top 30 cm of gyttja decreased by 0.4%, and 0.5 cm, respectively, representing 0.1 and 1.7% strain, respectively, as determined from these two different approaches. The compression of gyttja after Bic-Saint-Fabien was rewetted (2011) was small but might have been significant under drier conditions with greater water table variability, such as during the early stages of site drainage when it was being prepared for peat extraction or after peat production ceased. The release of water to the peat layer from the compression of gyttja after peat production finished and before rewetting occurred, might have been an important self-preservation mechanism, eventually making it easier to rewet. Water table drawdown in 2011 produced very small strain rates suggesting gyttja compression in this year had no important role; hence rewetting success was more reliant on other rewetting techniques implemented at this site.

Shannon Malloy (2013). Fen restoration on a bog cut down to sedge peat: A hydrological assessment of rewetting and the impact of a subsurface gyttja layer. UWSpace. http://hdl.handle.net/10012/7355