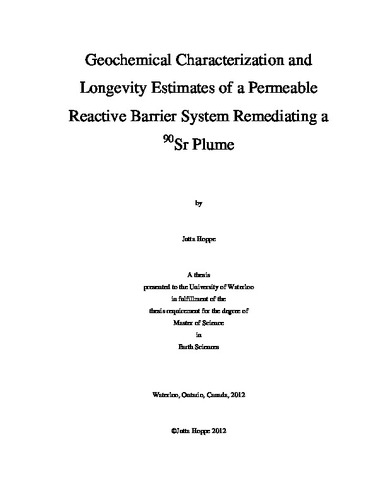 In 1998, a permeable reactive barrier system was installed at the Atomic Energy of Canada Ltd. (AECL) Chalk River Laboratories in Chalk River, Ontario, to prevent the discharge of a 90Sr plume into a nearby swamp. The system known as the “Wall and Curtain” contains clinoptilolite, a zeolite, as a reactive material to sorb 90Sr. The overall objective of this study was to provide refined estimates of the efficiency and longevity of the system. To better understand the flow in the aquifer and through the Wall and Curtain, a detailed physical field characterization of the site was performed. Borehole-dilution tests were performed in 19 mm (¾ inch) drive-point piezometers. The results indicate that the Wall and Curtain system intercepted deeper, contaminated groundwater as intended. Hydraulic conductivities (K) determined through slug tests indicate that the aquifer was relatively homogeneous. Average linear groundwater velocities determined through borehole dilution compared well with velocities determined through the Darcy equation based on slug-test K estimates. The measurements from the field study were used to develop a three dimensional physical flow model. The numerical computer code HydroGeoSphere was used to provide an approximate representation of groundwater flow in the aquifer and through the Wall and Curtain. The model was calibrated by comparing simulated and observed hydraulic head values across the site. The model showed good agreement with the observed heads and acceptable agreement with the field estimates of groundwater velocities. A detailed geochemical characterization of the aquifer and the reactive material, clinoptilolite, was performed through field and laboratory work. Pore-water samples were taken from multiple locations in the aquifer. Solid and pore-water samples from the reactive material were used to determine distribution coefficients for 90Sr and competing cations. Sequential leach tests were performed on small amounts of the radioactive solid samples. Results indicate that the system was highly efficient in treating an average mass flux of > 17,000 Bq/m2day-1. The leading edge of the plume was found to have only reached 40 cm into the 2 m thick Curtain of clinoptilolite after nearly 14 years of operation. The reactive material readily sorbed 90Sr, with a distribution coefficient of > 76,000 mL/g for beta activity. Kinetically controlled ion exchange was the main mechanism of sorption onto the clinoptilolite for most cations. The results indicate that the system was highly efficient. Reactive transport models of the site using two different numerical codes, HydroGeoSphere and MIN3P, were constructed to provide refined estimates of the longevity of the system. The model constructed in HydroGeoSphere included five solutes. Zoned distribution coefficients were specified for the transported solutes. In MIN3P, only the reactive material was used as a model domain. Typical concentrations of the plume were specified. Ion exchange was considered in the simulation, as well as radioactive decay of Sr. An updated version of MIN3P was used which also considers kinetic sorption of Sr. Longevity estimates of the different simulations ranged between 30 years and over 200 years for the Wall and Curtain system. Based on field and laboratory experiments, longevity estimates of 80 years to 100 years seemed more reasonable. Results of the numerical simulation indicate that by that time, the system would have remediated 1200 MBq of 90Sr. Continuous monitoring of the outflow will ensure that the time-to-replacement of the system will be met.