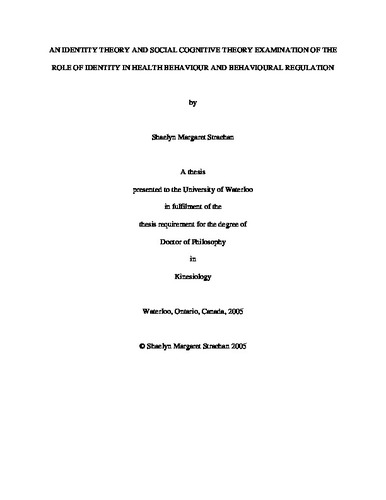 The self has been identified as the ?psychological apparatus that allows individuals to think consciously about themselves? (Leary & Price Tangney, 2003, p. 8). Further, the self has been identified as a worthwhile construct of investigation in relation to health behaviour (Contrada & Ashmore, 1999). Two self-related variables that have been useful in the study of health behaviour are <em>identity</em> (e. g. Anderson, Cychosz, & Franke, 1998; Petosa, Suminski & Hortz, 2003; Storer, Cychosz, & Anderson, 1997) and <em>self-efficacy</em> (Maddux, Brawley & Boykin, 1995). Identity Theory posits that individuals regulate their behaviour in a manner that is consistent with their goal identity (Gecas & Burke, 2003). Social Cognitive Theory provides a means of measuring social cognitions that may be important in behavioural regulation relative to identity. Further, self-efficacy beliefs may influence individuals? persistence at aligning their identity and behaviour. Research to date has investigated the link between identity and exercise (e. g. Anderson, Cychosz & Franke, 1998; Petosa, et al. , 2003). Further, researchers are beginning to investigate the link between identity and other health behaviours (e. g. Armitage & Conner, 1999; Kendzierski and Costello, 2004; Storer, Cychosz, & Andersen, 1997). However, research has not utilized the predictive frameworks offered by Identity Theory and Social Cognitive Theory to investigate the relationships between identity, behaviour and behavioural regulation. <br /><br /> Study One investigated the role of identity and self-efficacy beliefs in the maintenance of vigorous physical activity. Results were consistent with both Identity Theory and Social Cognitive Theory. Individuals who strongly identified with the runner identity expressed stronger task and self-regulatory efficacy beliefs. They also exercised more frequently and for longer durations than did those who only moderately identified with running. <br /><br /> Study Two further explored the relationship between exercise identity, exercise behaviour and the self-regulatory processes involved in behavioural regulation. Identity Theory and Social Cognitive Theory were used as guiding frameworks for this investigation. High and moderate exercise identity groups were compared in term of their affective and cognitive reactions to a hypothetical behavioural challenge to exercise identity. Consistent with Identity Theory, results indicated that participants appeared to be regulating their behaviour in a manner that was consistent with their exercise identity. Specifically, in response to the behavioural challenge to identity, high exercise identity participants, in contrast to their moderate counterparts, showed (a) less positive and (b) greater negative affect about the challenge, (c) higher self-regulatory efficacy for future exercise under the same challenging conditions, (d) stronger intentions for this future exercise, as well as for (e) using self-regulatory strategies to manage the challenging conditions and (f) intending to exercise more frequently under those conditions. <br /><br /> Study Three investigated whether identity with <em>healthy eating</em> could also be useful in understanding behaviour and behavioural regulation. Similar to Study Two, extreme healthy-eater identity groups? reactions to a hypothetical behavioural challenge to identity were compared. Results were similar to Study Two. Participants responded in a manner that suggested that they would regulate their future behaviour relative to their healthy-eater identity. In response to the behavioural challenge to identity, individuals who highly identified as healthy-eaters expressed less (a) positive affect, greater (b) negative affect, (c) self-regulatory efficacy for managing their healthy eating in the future challenging weeks, (d) intentions to eat a healthy diet, (e) generated more self-regulatory strategies and had (f) stronger intentions to use those strategies in future weeks under the same challenging conditions than did individuals who moderately identified themselves as healthy-eaters. Further, prospective relationships between healthy-eater identity and social cognitive variables, and healthy eating outcomes were examined. As was found in Study One in the context of exercise, healthy-eater identity and social cognitions predicted healthy eating outcomes. <br /><br /> Taken together, the three studies suggest that identity may be important in understanding health behaviours and the regulation of these behaviours. Also, the present findings support the compatible use of Identity Theory and Social Cognitive Theory in the investigation of identity and health behaviour.

Shaelyn Strachan (2005). An Identity Theory and Social Cognitive Theory Examination of the Role of Identity in Health Behaviour and Behavioural Regulation. UWSpace. http://hdl.handle.net/10012/729