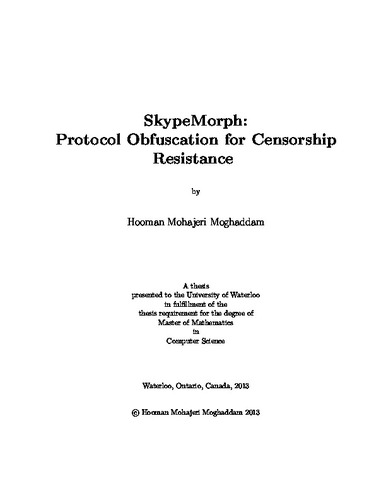 The Tor network is designed to provide users with low-latency anonymous communication. Tor clients build circuits with publicly listed relays to anonymously reach their destinations. Low-latency anonymous communication is also an essential property required by censorship circumvention tools and thus Tor has been widely used as a censorship resistance tool. However, since the Tor relays are publicly listed, they can be easily blocked by censoring adversaries. Consequently, the Tor project envisioned the possibility of unlisted entry points to the Tor network, commonly known as bridges. In recent years, there have been attempts to achieve fast and real-time methods to discover Tor, and specifically bridge, connections. In this thesis we address the issue of preventing censors from detecting a certain type of traffic, for instance Tor connections, by observing the communications between a remote node and nodes in their network. We propose a generic model in which the client obfuscates its messages to the bridge in a widely used protocol over the Internet. We investigate using Skype video calls as our target protocol and our goal is to make it difficult for the censoring adversary to distinguish between the obfuscated bridge connections and actual Skype calls using statistical comparisons. Although our method is generic and can be used by any censorship resistance application, we present it for Tor, which has well-studied anonymity properties. We have implemented our model as a proof-of-concept proxy that can be extended to a pluggable transport for Tor, and it is available under an open-source licence. Using this implementation we observed the obfuscated bridge communications and showed their characteristics match those of Skype calls. We also compared two methods for traffic shaping and concluded that they perform almost equally in terms of overhead; however, the simpler method makes fewer assumptions about the characteristics of the censorship resistance application’s network traffic, and so this is the one we recommend.