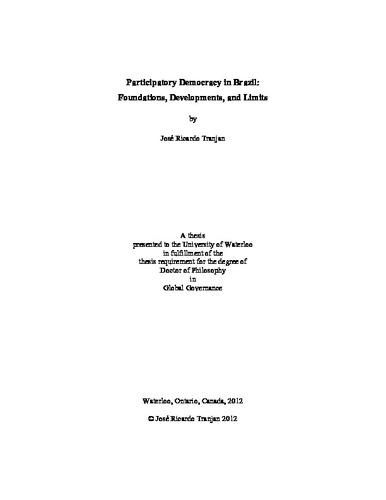 A lack of historical perspective sustained the widespread view that participatory initiatives in Brazil represented a marked rupture from traditional forms of political engagement to radically new democratic practices. This view overlooks both incremental steps towards broader political participation taking place throughout the 20th century and setbacks restricting participation in the 1980s. This dissertation offers a historical account of the emergence of participatory democracy in Brazil that challenges this dominant view and calls attention to the importance of structural factors and national-level political-institutional contexts. Three case studies of municipal administrations in the late-1970s and early-1980s shine light on the impact of structural factors in the emergence, design, and outcome of participatory initiatives, and the contrast of these precursory experiences with the internationally known 1990s participatory models shows how participatory ideals and practices responded to the changing institutional context of the 1980s. This dissertation puts forward three central arguments. First, research should not treat citizen participation as a normative imperative but instead examine how it emerges through social and political struggles fueled by structural inequalities. Second, it is unfounded to assume that citizen participation will lead to profound transformations of national-level institutions, but it is equally erroneous to suppose that citizen participation is always intended to strengthen representative institutions; the long-term impact of direct citizen participation is an empirical rather than analytical or normative question. Third, a key challenge of participatory democracy today is to free itself from the inflated expectations imposed on it by its own enthusiastic supporters.