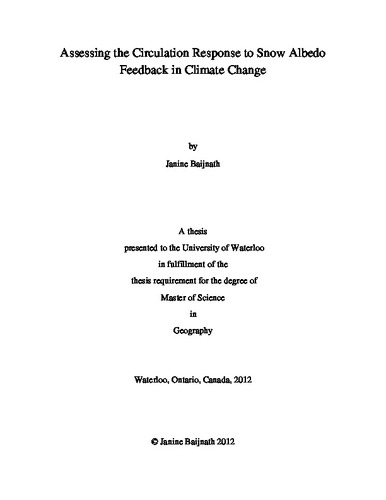 Snow Albedo Feedback (SAF) in response to climate change is a process that can amplify the climate warming response to increases in anthropogenic atmospheric CO2 concentrations from the 20th to the 21st Century. Warmer surface air temperature may induce snowmelt and expose darker underlying surfaces which absorb more incoming solar radiation and further increase the ambient temperature. Springtime SAF in the fully Coupled Model Intercomparison Project Phase 3 (CMIP3) models is associated with summertime circulation. However, no clear physical mechanism explaining this link has been found. Furthermore, there is a large intermodel spread in the projection of SAF among the CMIP3 models which is primarily controlled through the parameterization of snow albedo in each model. Limited work was conducted on assessing the response of SAF to that of an isolated controlling parameter such as snow albedo. Here, the uncoupled Geophysical Fluid Dynamics Laboratory Atmospheric Model 2.1 (AM2.1) was used to diagnose SAF in the CMIP3 models by conducting a set of sensitivity experiments with perturbed snow albedo. This was performed to remove indirect external climate factors that may influence SAF and to use the simplified uncoupled model to understand the behaviours exhibited by the complex coupled models. Snow cover extent (SNC) and snow metamorphosis as a function of temperature (TEM) that influences SAF, as well as the knock-on effects of SAF on soil moisture, snow mass, snow melt and circulation were analyzed using both the CMIP3 and AM2.1 models. In addition, it was hypothesized that summertime Land Sea Contrast response to climate change (dLSC) is a physical mechanism that induces summertime circulation patterns in relation to springtime SAF. It is found that the AM2.1 can similarly reproduce SNC and TEM as well as the spread in SAF exhibited in the CMIP3 models. However, no robust link can be determined between SAF and its knock-on effects. Furthermore, the correlation between SAF and dLSC is not significant and thus dLSC is not a physical mechanism that influences the summertime circulation patterns in response to climate change. It is the expectation that these research results can provide an in-depth understanding of the role of SAF among fully coupled GCMs through tests performed by the uncoupled simulation.