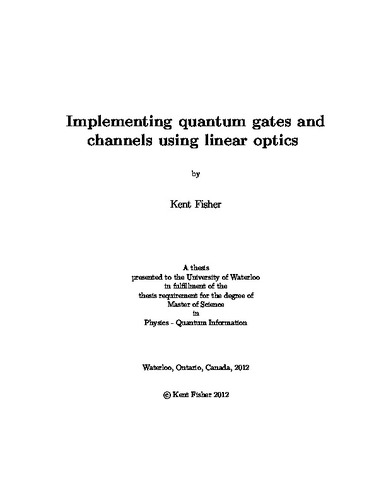 This thesis deals with the implementation of quantum channels using linear optics. We begin with overviews of some important concepts in both quantum information and quantum optics. First, we discuss the quantum bit and describe the evolution of the states via quantum channels. We then discuss both quantum state and process tomography, methods for how to determine which states and operations we are experimentally implementing in the lab. Second, we discuss topics in quantum optics such the generation of single photons, polarization entanglement, and the construction of an entangling gate. The first experiment is the implementation of a quantum damping channel, which intentionally can add a specific type and amount of decohering noise to a photonic qubit. Specifically, we realized a class of quantum channels which contains both the amplitude-damping channel and the bit-flip channel, and did so with a single, static, optical setup. Many quantum channels, and some gates, can only be implemented probabilistically when using linear optics and postselection. Our main result is that the optical setup achieves the optimal success probability for each channel. Using a novel ancilla-assisted tomography, we characterize each case of the channel, and find process fideilities of $0.98 \pm 0.01$ for the amplitude-damping channel and $0.976 \pm 0.009$ for the bit-flip. The second experiment is an implementation of a protocol for quantum computing on encrypted data. The protocol provides the means for a client with very limited quantum power to use a server's quantum computer while maintaining privacy over the data. We perform a quantum process tomography for each gate in a universal set, showing that only when the proper decryption key is used on the output states, which is hidden from the server, then the action of the quantum gate is recovered. Otherwise, the gate acts as the completely depolarizing channel.