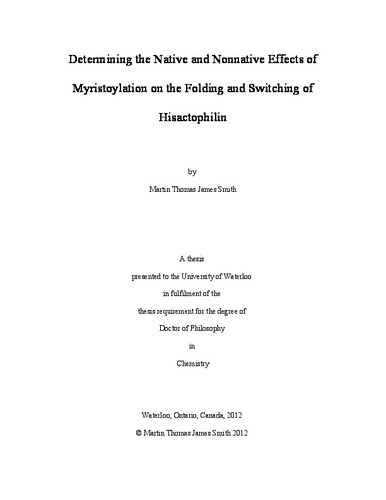 Myristoylation, the covalent linkage of a C14 saturated fatty acyl chain to the N-terminal glycine in a protein, plays an important role in reversible membrane and protein binding in cellular signaling by the modified proteins. Little is known about the effects of myristoylation on the energetics and molecular mechanisms of folding and switching between functional states of the myristoyl group. Here, hisactophilin, a small naturally myristoylated histidine-rich β-trefoil protein which binds cell membranes and actin in a pH-dependent manner, is used as a model system to study the effects of myristoylation on the folding and switching behaviour in proteins. The combination of equilibrium denaturation, kinetic folding, kinetic unfolding, NMR chemical shift analysis, NMR lineshape analysis, and NH/D exchange provide insight into energetic and dynamic mechanisms that govern the folding and switching function of hisactophilin. Equilibrium denaturation measurements show that myristoylation significantly increases hisactophilin stability. From a comparison to other proteins, it is concluded that an increase in protein stability upon modification and burial of the attached group is likely to occur in numerous proteins modified with fatty acyl or other hydrophobic groups, and that the biophysical effects of such modification are likely to play an important role in their functional switches. Interestingly, the global protein folding and unfolding rates for hisactophilin are both markedly increased upon myristoylation. In addition, the increased global dynamics caused by myristoylation of hisactophilin reveals a general mechanism whereby hydrophobic moieties can make nonnative interactions or relieve strain in transition states, thereby increasing the rates of interconversion between different conformational states. To test this general mechanism various mutations were introduced into hisactophilin to alter the nonnative interactions surrounding the myristoyl binding pocket. The folding rates of these mutants suggest that the myristoyl group makes robust interactions that vary in the transition state. Myristoylation is also fundamental to the pH-dependent conformational switch function of hisactophilin, which involves the uptake of ~1.5 protons, likely by a few key histidines, the myristoyl group switches from a sequestered state in the protein core to an accessible state where the myristoyl may bind to the inside of the membrane. Using thermodynamic cycle analysis of stability data vs. pH an apparent conformational switch pKa, the pKswitch, of 6.95 and an apparent coupling energy, ΔGswitch, of 2.0 kcal•mol-1 is obtained. The equations used to analyze H+-binding induced switching in hisactophilin are then recast to analyze the thermodynamic interactions in any ligand-binding induced switching system. This approach is applied to other ligand-binding induced switching systems and several hisactophilin mutants, in which switching is broken. The results show that the magnitude of ΔGswitch provides a good measure for the extent of conformational change in a switching system. For a series of hisactophilin mutants, including mutants in which the switching is broken, the folding rates vary between mutants. However, all mutant forms of hisactophilin show a consistent increase in the folding rate acquired upon myristoylation. The fact that switching can be broken in some mutants but the effect of myristoylation on the folding rate is consistent suggests that while the folding transition state myristoyl interactions are robust, the interactions that govern equilibrium myristoyl switching are quite sensitive to change. NMR measurements also indicate that myristoyl switching exhibits fast dynamics. NH/D exchange experiments reveal that while many amides show increased stability upon myristoylation there are local areas of structure that are destabilized upon myristoylation which may facilitate the fast pH switch. Thus, the energetic and dynamic effects of myristoylation characterized in vitro using biophysical methods provide insight into the molecular mechanism that underlies myristoyl switching that occurs in vivo.

Martin Thomas James Smith (2012). Determining the native and nonnative effects of myristoylation on the folding and switching of hisactophilin. UWSpace. http://hdl.handle.net/10012/7016