Till We Have Faces: C. S. Lewis's Textual Metamorphosis 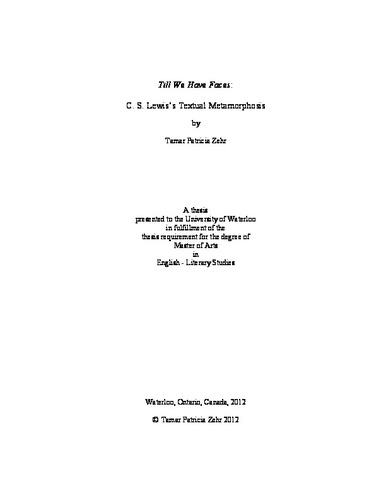 C. S. Lewis’s novel, Till We Have Faces, has been misunderstood by both scholars and readers alike. This paper seeks to read the text through the lens of Lewis’s own literary criticism. It begins by presenting Lewis’s fundamental dilemma of the mind, the rift between the rational and the imaginative faculties. Lewis posits myth as a “partial solution” to this problem. This paper traces Lewis’s ideas from his early position on myth as “beautiful lies” to the more nuanced, later position where myth is connected with terms like “truth,” “reality,” “fact” and “history.” Using the text of “On Stories,” and the chapter “On Myth” from Lewis’s book An Experiment in Criticism, this paper argues that Lewis, because of the basic elusiveness of mythic experience, steps into the use of story or narrative as a provisional solution for the dilemma of the mind. This is then applied to Till We Have Faces, arguing that the story is not a myth or an allegory, but a realistic novel with a hidden mythic reality, a Lewisian narrative that fulfills his requirements of Story. A close reading of Till We Have Faces connects the text with Lewis’s realism of content and realism of presentation. This reading then places the text within the problem of rationality set against imaginative reception. Till We Have Faces is a test case for Lewis’s extensive ideas about Divine Myth, its hiddenness behind and within narrative, and its power to heal a divided mind. The narrative of Till We Have Faces, for the main character Orual, as well as for the receptive reader, comes to embody the transformative power of extra-literary myth within the containment of word-dense, tensed story.