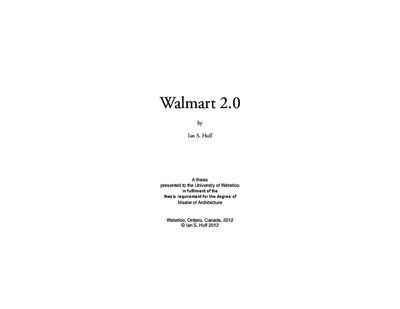 Processes of industry and economic exchange have significantly and continually defined the underlying structure and formal characteristics of the American city. Contemporary ‘distributed’ systems of economy and industry rely on the movement of goods produced in distant locations (often overseas) to their eventual point of consumption. This has created a fundamental spatial disconnect between production, manufacturing, and consumption within the city; where local economies often have no relationship with the production or subsequent economic benefit of the goods they consume. As these contemporary systems of industrial production are often reliant on Just-In-Time operational models, the speed and turnover of consumption have become the dominant metrics of economic success. Productive industrial entities and territory, once ingrained in the inhabited city fabric have gradually disappeared; leaving behind smooth, frictionless surfaces of retail, logistics, and service, lacking a social viscosity, and consideration for the public dimension of the city. This thesis argues that Walmart, the archetypal big-box retailer, forms today’s dominant industrial actor; significantly influencing the socio-economic, cultural, and physical configurations of the American city. First, Walmart’s current distributed operational model is analyzed to better understand and contextualize the connections between industry, production, consumption, and urbanization. The next sections speculate upon the long-term social, economic, and environmental sustainability of Walmart’s strategy; while examining the links between social interaction, idea exchange, innovation, and physical proximity within the city. As a result of many factors, including rising energy costs, this project predicts, and then explores a future where distributed operational models are no longer viable. This thesis predicts a subsequent transformation in manufacturing and consumption within the United States; linked to a resurgence in domestic production, by emerging micro-production formats. This scenario, coupled with a stated goal or mandate by Walmart to reduce overall supply chain energy expenditure, presents a unique opportunity for a speculative, opportunistic architecture within the American city. Walmart 2.0 radically reconsiders Walmart’s existing operational model and related built infrastructures, in the creation of a new industrial system that seeks to re-inject systems of consumption, production, and exchange, back into the urban fabric. Walmart becomes an ‘open’, ‘for-hire’ underlying facilitator for the production, consumption, and movement of goods between local nodes of economy, using their existing expertise in logistical, territorial, and data management. As such, Walmart 2.0 acts as a physical and systemic platform for self-organising production and market exchanges that are facilitated, but not controlled by Walmart. A redevelopment of the generic Walmart Supercenter creates a system of participation; where local communities of Walmart 2.0 users both create and consume the content flowing through the Walmart 2.0 system; allowing these communities to engage in the economies of their own locale. Broadly, Walmart 2.0 seeks to provoke the emergence of an urban fabric with an engrained sensitivity towards human interactions in relation to systems of production, consumption and exchange. Further, the project seeks to illustrate a method of operation, through which architects may gain an increased agency within the powerful industrial systems shaping the underlying structure of the contemporary city; a method based on the analysis of existing industrial actors, and speculating upon their future transformations with a heightened social consideration.