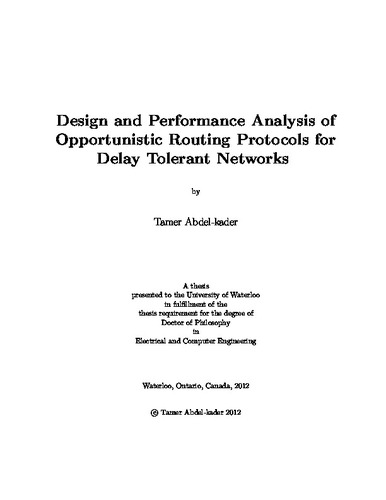 Delay Tolerant Networks (DTNs) are characterized by the lack of continuous end-to-end connections because of node mobility, constrained power sources, and limited data storage space of some or all of its nodes. Applications of DTNs include vehicular networks and sensor networks in suburban and rural areas. The intermittent connection in DTNs creates a new and challenging environment that has not been tackled before in wireless and wired networks. Traditional routing protocols fail to deliver data packets because they assume the existence of continuous end-to-end connections. To overcome the frequent disconnections, a DTN node is required to store data packets for long periods of time until it becomes in the communication range of other nodes. In addition, to increase the delivery probability, a DTN node spreads multiple copies of the same packet on the network so that one of the copies reaches the destination. Given the limited storage and energy resources of DTN nodes, there is a trade off between maximizing delivery and minimizing storage and energy consumption. DTN routing protocols can be classified as either blind routing, in which no information is provided to select the next node in the path, or guided routing, in which some network information is used to guide data packets to their destinations. In addition they differ in the amount of overhead they impose on the network and its nodes. The objective of DTN routing protocols is to deliver as many packets as possible. Acquiring network information helps in maximizing packet delivery probability and minimizing the network overhead resulting from replicating many packet copies. Network information could be node contact times and durations, node buffer capacities, packet lifetimes, and many others. The more information acquired, the higher performance could be achieved. However, the cost of acquiring the network information in terms of delay and storage could be high to the degree that render the protocol impractical. In designing a DTN routing protocol, the trade-off between the benefits of acquiring information and its costs should be considered. In this thesis, we study the routing problem in DTN with limited resources. Our objective is to design and implement routing protocols that effectively handles the intermittent connection in DTNs to achieve high packet delivery ratios with lower delivery cost. Delivery cost is represented in terms of number of transmissions per delivered packet. Decreasing the delivery cost means less network overhead and less energy consumption per node. In order to achieve that objective, we first target the optimal results that could be achieved in an ideal scenario. We formulate a mathematical model for optimal routing, assuming the presence of a global observer that can collect information about all the nodes in the network. The optimal results provide us with bounds on the performance metrics, and show the room for improvement that should be worked on. However, optimal routing with a global observer is just a theoretical model, and cannot be implemented practically. In DTNs, there is a need for a distributed routing protocol which utilizes local and easily-collectable data. Therefore, We investigate the different types of heuristic (non-optimal) distributed routing protocols, showing their strengths and weaknesses. Out of the large collection of protocols, we select four protocols that represent different routing classes and are well-known and highly referred by others working in the same area. We implement the protocols using a DTN simulator, and compare their performance under different network and node conditions. We study the impact of changing the node buffer capacities, packet lifetimes, number of nodes, and traffic load on their performance metrics, which are the delivery ratio, delivery cost, and packet average delay. Based on these comparisons, we draw conclusions and guidelines to design an efficient DTN routing protocol. Given the protocol design guidelines, we develop our first DTN routing protocol, Eco-Friendly Routing for DTN (EFR-DTN), which combines the strengths of two of the previously proposed protocols to provide better delivery ratio with low network overhead (less power consumption). The protocol utilizes node encounters to estimate the route to destination, while minimizing the number of packet copies throughout the network. All current DTN routing protocols strive to estimate the route from source to destination, which requires collecting information about node encounters. In addition to the overhead it imposes on the network to collect this information, the time to collect this information could render the data worthless to propagate through the network. Our next proposal is a routing protocol, Social Groups Based Routing (SGBR), which uses social relations among network nodes to exclude the nodes that are not expected to significantly increase the probability of delivering the packet to its destination. Using social relations among nodes, detected from node encounters, every group of nodes can form a social group. Nodes belonging to the same social group are expected to meet each other frequently, and meet nodes from other groups less frequently. Spreading packet copies inside the same social group is found to be of low-added value to the carrying node in delivering a packet to its destination. Therefore, our proposed routing protocol spreads the packet copies to other social groups, which decreases the number of copies throughout the network. We compare the new protocol with the optimal results and the existing well-known routing protocols using real-life simulations. Results show that the proposed protocol achieves higher delivery ratio and less average delay compared to other protocols with significant reduction in network overhead. Finally, we discuss the willingness of DTN nodes to cooperate in routing services. From a network perspective, all nodes are required to participate in delivering packets of each other. From a node perspective, minimizing resource consumption is a critical requirement. We investigate the degree of fair cooperation where all nodes are satisfied with their participation in the network routing services. A new credit-based system is implemented to keep track of and reward node participation in packet routing. Results show that the proposed system improves the fairness among nodes and increases their satisfaction.