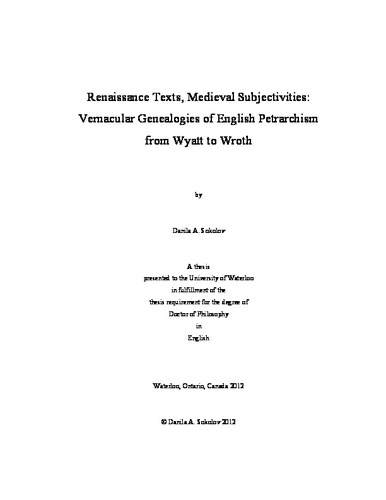 This dissertation investigates the symbolic presence of medieval forms of textual selfhood in early modern English Petrarchan poetry. Undertaking a systematic re-reading of a significant body of English Petrarchism through the prism of late medieval English poetry, it argues that medieval poetic texts inscribe in the vernacular literary imaginary (i.e. a repository of discursive forms and identities available to early modern writers through antecedent and contemporaneous literary utterances) a network of recognizable and iterable discursive structures and associated subject positions; and that various linguistic and ideological traces of these medieval discourses and selves can be discovered in early modern English Petrarchism. Each of the four chapters traces medieval genealogies of a distinct scenario of subjectivity deployed by English Renaissance Petrarchism. The first chapter considers the significance of William Langland’s poetics of meed (reward) for the anti-laureate and anti-courtly identities assumed by Thomas Wyatt in his Petrarchan poems and by Edmund Spenser in the Amoretti. The second chapter examines the persistence of vernacular melancholy (encapsulated in Geoffrey Chaucer’s Book of the Duchess) in the verse of Henry Howard, earl of Surrey and in Philip Sidney’s Astrophil and Stella. The poetics of melancholy engenders a fragmented subjectivity that manifests itself through a series of quasi-theatrical performances of identity, as well as an ambivalent form of poetic discourse in which the production of Petrarchism is carried out alongside its radical critique. The focus of chapter three is the master trope of royal incarceration and its function as a mechanism of subject formation in the poetry of James I Stewart, Charles of Orleans, Mary Stewart, and Lady Mary Wroth. As the dissertation argues, the figure of an imprisoned sovereign is a crucial ideologeme of the pre-modern English political and literary imaginary, underwriting the poetics and politics of royal identity from Sir John Fortescue to James VI/I. Lastly, the fourth chapter investigates medieval genealogies of the subject afflicted with a malady of desire in Shakespeare’s sonnets, by tracing its inchoate vernacular precedents back to the poems of Thomas Hoccleve (La Male Regle) and Robert Henryson (The Testament of Cresseid).