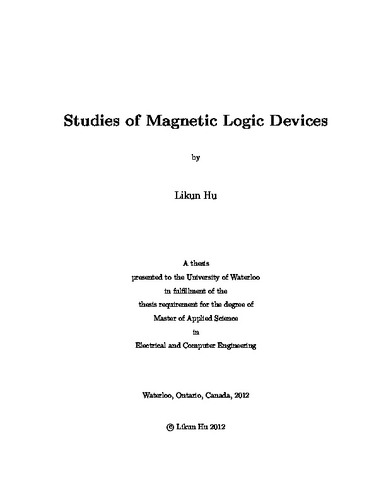 Magnetic nanoscale devices have shown great promise in both research and industry. Magnetic nanostructures have potential for non-volatile data storage applications, reconfigurable logic devices, biomedical devices and many more. The S-state magnetic element is one of the promising structures for non-volatile data storage applications and reconfigurable logic devices. It is a single-layer logic element that can be integrated in magnetoresistive structures. We present a detailed micromagnetic analysis of the geometrical parameter space in which the logic operation is carried out. The influence of imperfections, such as sidewall roughness and roundness of the edge is investigated. Magnetic nanowires are highly attractive materials that has potential for applications in ultrahigh magnetic recording, logic operation devices, and micromagnetic and spintronic sensors. To utilize applications, manipulation and assembly of nanowires into ordered structures is needed. Magnetic self-alignment is a facile technique for assembling nanowires into hierarchical structures. In my thesis, I focus on synthesizing and assembling nickel nanowires. The magnetic behaviour of a single nickel nanowire with 200~nm diameter is investigated in micromagnetic simulations. Nickel nanowires with Au caps at the ends were synthesized by electrochemical deposition into nanopores in alumina templates. One-dimensional alignment, which forms chains and two-dimensional alignment, which forms T-junctions as well as cross-junctions are demonstrated. Attempts to achieve three-dimensional alignment were not successful yet. I will discuss strategies to improve the alignment process.