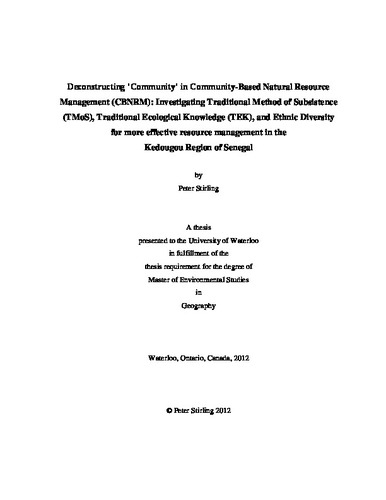 This thesis seeks to highlight the importance of a geographic and culturally specific knowledge base to guide natural resource management and governance policy, particularly within the West African context. In order to demonstrate the level of complexity that may exist within this realm, the Kedougou region of Senegal is used as a case study. Traditional Method of Subsistence (TMoS), Traditional Ecological Knowledge (TEK), and ethnic diversity are considered in order to validate the need to go beyond a superficial involvement of community within models such as Community-based Natural Resource Management (CBNRM). Focus groups were conducted for this case study in order to identify areas of similarity and difference that exist along ethnic lines. Two areas of concern that all ethnic groups agreed upon was a depletion of water resources and a diminished growing season that leads to an annual food shortage in the region. Three primary areas of difference were found to coincide with traditional ethnic boundaries in the region: traditional religious belief, wealth accumulation and social hierarchy. The findings of this research demonstrate that while areas of cohesive community concern may serve as a focal point for CBNRM programs, it is also important to consider areas of ethnic difference which hold the potential to significantly influence sustainable and equitable resource management. For example, while traction methods for intensified agriculture are identified as important by all ethnic groups represented in this thesis: (A) traditional agricultural ethnic groups already have experience with these methods, and may only need access to assistance such as micro-credit opportunities, (B) the pastoral ethnic groups already have an abundance of traction animals, and so equipment may be what is primarily needed, while (C) the horticultural group may not have access to the land necessary for optimal traction agriculture. It is therefore suggested that CBNRM programs must be structured around community variables found along cultural lines in order to be of value to government and non-government conservation programs and policy formation in the region.