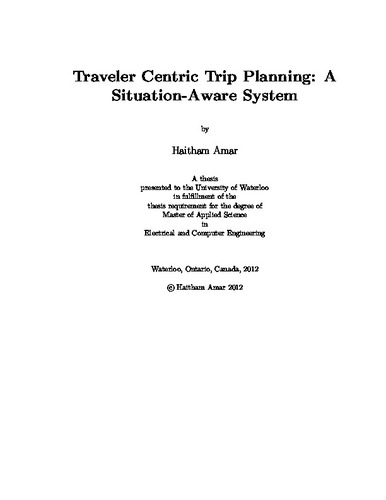 Trip planning is a well cited problem for which various solutions have been reported in the literature. This problem has been typically addressed, to a large extent, as a shortest distance path planning problem. In some scenarios, the concept of shortest path is extended to reflect temporal objectives and/or constraints. This work takes an alternative perspective to the trip planning problem in the sense it being situation aware. Thus, allowing multitudes of traveler centric objectives and constraints, as well as aspects of the environment as they pertain to the trip and the traveler. The work in this thesis introduces TSADA (Traveler Situation Awareness and Decision Aid) system. TSADA is designed as a modular system that combines linguistic situation assessment with user-centric decision-making. The trip planning problem is modeled as a graph G. The objective is to find a route with the minimum cost. Both hard and soft objective/attributes are incorporated. Soft objective/attributes such as safety, speed and driving comfortability are described using a linguistic framework and processed using hierarchical fuzzy inference engine. A user centric situation assessment is used to compute feasible routes and map them into route recommendation scheme: recommended, marginally recommended, and not recommended. In this work, we introduce traveler's doctrines concept. This concept is proposed to make the process of situation assessment user centric by being driven by the doctrine that synthesizes the user's specific demands. Hard attributes/objectives, such as the time window and trip monitory allowances, are included in the process of determining the final decision about the trip. We present the underline mathematical formulation for this system and explain the working of the proposed system to achieve optimal performance. Results are introduced to show how the system performs under a wide range of scenarios. The thesis is concluded with a discussion on findings and recommendations for future work.