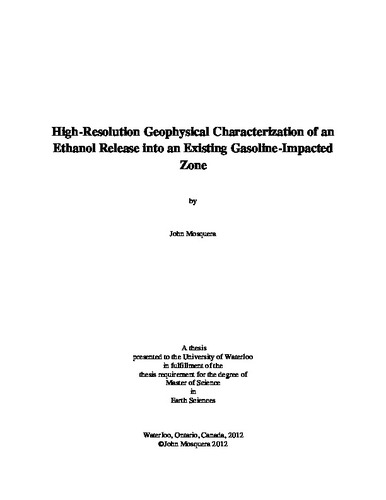 This study aims to evaluate the ability of high-frequency (450 and 900 MHz) ground-penetrating radar (GPR) to monitor the effects of an ethanol release over an existing gasoline-contaminated zone. In September 2009, 184L of denatured ethanol mixture (E95) was released into an unconfined sand aquifer directly over gasoline residuals (E10) released the previous year. GPR profiling prior to the ethanol release indicated that the residual gasoline-contaminated zone was largely confined to its initial release point. The GPR profiling performed post ethanol release observed strong shallow reflection events which propagated laterally away from the trench over a one-month period, at which point the maximum extent was established. The effects of the ethanol were also observed with the 450MHz frequency, in the form of an apparent “velocity pull-up” of a stratigraphic reflector. After the initial expansion, reduction in reflection amplitude and increasing traveltimes within the trench, were observed until the onset of winter conditions and the development of frozen soil. Over the winter the presence of ethanol inhibited the freezing process of the pore water in the contaminated zone, thus resulting in a difference in the dielectric properties of the unfrozen verse frozen zone. The unfrozen zone was significantly greater than the spatial extent of the strong reflection events that were monitored through GPR prior to winter. The spatial extent and depth of the unfrozen zone imaged by the GPR profiling was confirmed by a physical impedance depth survey. After thaw, evidence of the ethanol or gasoline was absent until mid-summer, when the water table dropped to approximately 80cm. At this point strong reflection events were again observed throughout the contaminated zone.