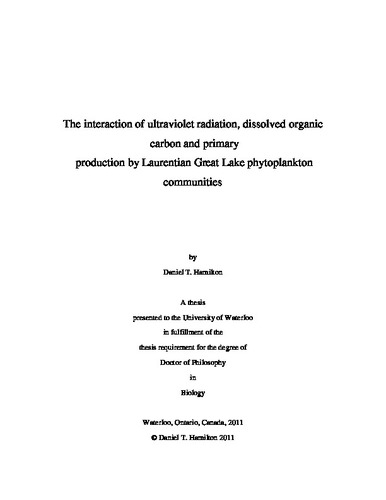 Man-made chemicals are continuing to erode the ozone layer, and recovery of the ozone layer is slow. Therefore aquatic ecosystems are continuing to receive elevated ultraviolet radiation (UVR). The aim of this work was to investigate and quantify the impact of ultraviolet light on photosynthesis at various near-shore Great Lakes sites (Hamilton Harbour, Lake Ontario, Bay of Quinte, Woods Bay, Georgian Bay) using both oxygen metabolism and carbon assimilation. Enhanced UVR suppressed primary production at all stations when compared to incubations with photosynthetically active radiation (PAR) only. The average decline in net O2 production was greater than 90% and sometime exceeded 100%; that is, enhanced UVR often produced net consumption of oxygen. Carbon was always assimilated with UVR+PAR exposure, although C- assimilation declined on average between 40 and 60% relative to PAR only, so there must have been some photosynthetic activity taking place as well as enhanced oxygen consumption. The oxygen consumption appears to be biotic, as tests for abiotic oxygen consumption failed to demonstrate any O2 loss. Dark respiration after 4-h light treatments with PAR or PAR+UVR was sometimes different, but not in a consistent way even at the same site. For example, at Hamilton Harbour on two occasions respiration after the PAR+ UVR exposure exceeded the PAR only treatments, while on the remaining dates dark respiration after the PAR- only treatments exceeded the PAR+UV treatment. While there is some evidence of enhanced dark respiration as a result of exposure during incubation in enhanced ultraviolet radiation, it appears that the decline in net photosynthesis is caused mainly be the decline in gross photosynthesis rather than an increase in respiration. Carbon assimilation was suppressed under enhanced ultraviolet radiation, and the degree of suppression was negatively related to the 14-day cumulative average of ultraviolet radiation (at 295 nm) prior to the experiment. I interpret this as evidence that phytoplankton to adapt to UVR exposure. Neither chlorophyll nor DOC appeared to be important factors. Bacterial productivity also responded to the PAR + UVR irradiation compared to the PAR alone incubations although the response appeared to vary with season. Experimental PAR + UVR incubations carried out during the mid season appeared to have higher production during the 12 h post-treatment dark incubation compared to incubations under PAR, while those from later in the season tended to respond with suppressed productivity in the PAR + UVR incubations compared to the PAR alone.