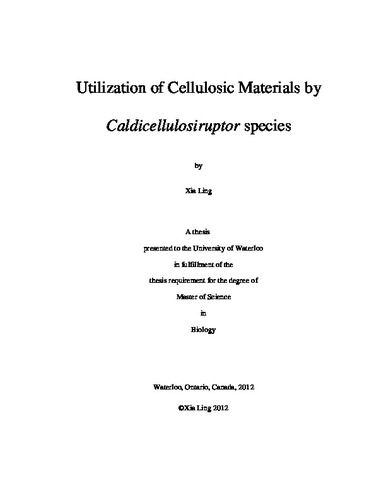 Caldicellulosiruptor is a genus of thermophilic, anaerobic, Gram-positive, non-spore-forming cellulolytic bacteria and is capable of fermenting a wide spectrum of carbohydrates. Both Caldicellulosiruptor saccharolyticus and Caldicellulosiruptor kristjanssonii were found to be able to use the raw cellulosic material，switchgrass，for producing H2. Therefore, experiments were designed and conducted to select the optimal substrate and investigate the parameters involved in the fermentation process. C. saccharolyticus and C. kristjanssonii were cultivated on different sugars including glucose, xylose, cellobiose, xylan, avicel (PH105), and switchgrass. The highest H2 production was obtained on glucose by C. saccharolyticus with 2.9 mol (H2)/mol (glucose), whereas the yield by C. kristjanssonii was only 1.7 mol (H2)/mol (glucose). Moreover, the sample of C. saccharolyticus on xylose gained higher cell density, compared with glucose. During the cell growth, there was a small decrease of the H2/acetate ratio from 20 hour’s data to 40 hour’s along with the existence or significant increase of lactate. This suggested that a possible direction shift of metabolism happened in between the two time points, perhaps due to the H2 end product inhibition. A scanning electronic microscope (SEM) and confocal microscope were used to detect the adhesion between cells of these two microorganisms and cellulose and hemicellulose substrates in real time. A series of microscope pictures revealed non-specific and specific attachments between the cells and cellulosic materials, such as avicel and switchgrass, as well as the attachment behavior corresponding to the amount of H2 production. Proteomic analysis of C. saccharolyticus showed the existence of proteins related to mobility of the microbes such as flagella and chemotaxis. Other proteins found， that contribute to the attachment between the cell and substrates, are the family 3 cellulose-binding module (CBM 3), the fibronectin-binding-A domain-containing proteins, the s-layer proteins, and a lysine motif protein. Groups of proteins like glycoside hydrolases (GHs), alcohol dehydrogenase (ADH) and hydrogenase that are responsible for the breakdown of cellulose and hemicellulose substrates, and the production of ethanol and H2, were also found in the proteome.