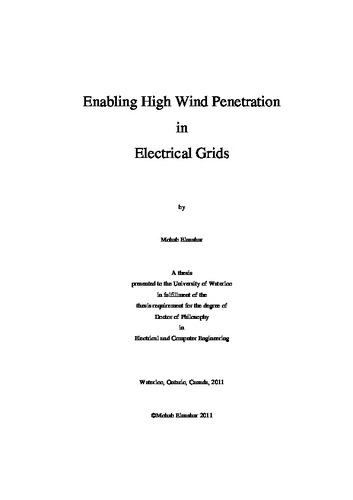 Wind generation has become one of the most popular choices of technology for adding new generation capacity to power systems worldwide. Several factors have contributed to the increased integration of wind generation, including environmental concerns and the continual increase in fossil fuel prices. As well, recent regulations have moved toward limitations on greenhouse gases, especially in the European Union (EU). Similar laws are currently under consideration in the US and other parts of the world. Other factors have also promoted the use of wind energy, such as advances in manufacturing and control technology and the attractiveness of wind as a “green” source of energy. The large-scale integration of wind power into an electricity system introduces planning and operational challenges because of the intermittent nature of wind speed and the difficulty involved in predicting it. For these reasons, wind energy is often considered an unreliable energy source. Additional problems are associated with the integration of large-scale wind farms into an electrical grid, among which wind power fluctuation is the most challenging. To maximize the penetration level of wind energy in a grid, a reliable technology must be developed in order to eliminate or at least decrease wind power fluctuation. The primary goal of this thesis was to develop methods of maximizing the penetration level of wind energy conversion systems (WECSs) into a grid, which requires mitigating wind power fluctuation. A robust control technique has therefore been developed for mitigating wind power fluctuation. This control technique exploits historical environmental data collected over a number of years in order to evaluate the profile of the output power of a variety of wind energy conversion systems (WECSs). The developed control technique was applied to Types A and C WECSs modifying the pitch angle controller of Type A WECS and the back-to-back converter control of Type C WECS. The Attachment of a storage device to the WECSs after the control technique is applied was investigated from both an economic and a technical point of view. The optimum sizing and siting of the wind energy conversion system equipped with the proposed control technique was also studied. This research is expected to contribute to the advancement of WECS technology by presenting a feasible solution to the problems associated with the integration of large-scale WECSs into electrical grids.