The interaction between retrieval and encoding processes in memory 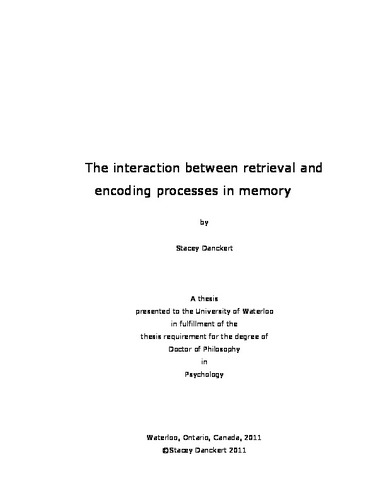 In memory, encoding and retrieval are often conceived of as two separate processes. However, there is substantial evidence to suggest that this view is wrong—that they are instead highly interdependent processes. One recent example is from Jacoby, Shimizu, Daniels, and Rhodes (2005a), who showed that new words presented as foils among a list of old words that had been deeply encoded were themselves subsequently better recognized than were new words presented as foils among a list of old words that had been shallowly encoded. This paradigm, referred to as memory-for-foils, not only demonstrates a link between encoding and retrieval, but also has led to a proposal about what form this interaction is taking in this task. Jacoby et al. (2005a) proposed that people put in place a retrieval mode that leads to a reprocessing of the original encoding state, which is incidentally applied across both old and new items within the context of a recognition memory test. Such a constrained-retrieval account suggests an intimate relation between encoding and retrieval processes that allows for memories to be highly integrated. The goal of this thesis is to provide a better understanding of the generalizability and limitations of this memory-for-foils phenomenon and, ultimately, to provide more direct evidence for the interaction of these processes. Experiments 1 and 2 began by replicating the memory-for-foils phenomenon as well as an experiment by Marsh et al. (2009b) which confirmed that the phenomenon does not result simply from strength of encoding differences. Experiment 3 then substituted a deep vs shallow imagery manipulation for the levels-of-processing manipulation, demonstrating that the effect is robust and that it generalizes, also occurring with a different type of encoding. Experiment 4 extended the generalizability of the task to factual phrases. Experiment 5 then moved on to testing the encoding/retrieval interactions by once again employing the imagery encoding manipulation with an additional quality judgment in the final recognition memory test. Using the remember/know paradigm (Gardiner, 1988; Tulving, 1985) demonstrated that more highly-detailed memories were associated with foils from the test of deep items than with foils from the test of shallow items. From there, response time was used to infer processing speed in Experiment 6a, in a test of whether foils tested among deep items incur an advantage independent of the manipulation undergone by those items. When a lexical decision test replaced the final recognition test, there was no evidence of a memory advantage for “deep” foils over “shallow” foils. Finally, Experiment 6b provided compelling evidence for context-related encoding during tests of deeply encoded words, showing enhanced priming for foils presented among deeply encoded targets when participants made the same deep encoding judgments on those items as were made on the targets during study. Taken together, these findings provide support for the source-constrained retrieval hypothesis and for the idea of a retrieval mode. New information—information that we may not even be intending to remember— is influenced by how surrounding items are encoded and retrieved, as long as the surrounding items recruit a coherent mode of processing. This demonstrates a clear need to consider encoding and retrieval as highly interactive processes and to avoid conceptualizing them as entirely separate entities. This is a crucial part of increasing our understanding of the fundamental processes in memory.

Stacey Danckert (2011). The interaction between retrieval and encoding processes in memory. UWSpace. http://hdl.handle.net/10012/6335