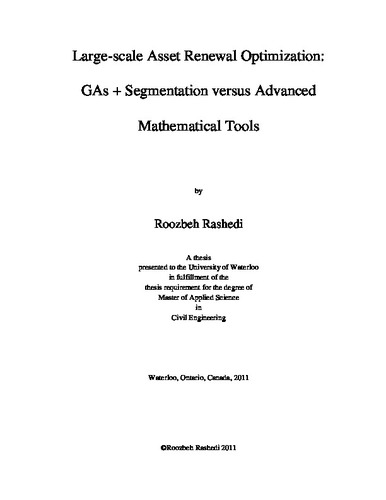 Capital renewal is an essential decision in sustaining the serviceability of infrastructure. Effectively allocating limited renewal funds amongst numerous asset components represents a large-scale combinatorial optimization problem that is difficult to solve. While various mathematical optimization techniques have been presented in the published literature, they are not very effective in handling the complexities and huge calculations related to large scale problems. More recently new evolutionary-based techniques, such as genetic algorithms (GA) have been introduced for finding near-optimum solutions to large-scale problems. Experimenting with this technique for asset renewal problems has revealed that GAs performance rapidly degrades with problem size. For instance, a previous research by Hegazy and Elhakeem (2010), could improve fund allocation for only a portion of total existing components (maximum of 8000 asset components) with degradation in optimization performance by increasing number of components. To address larger scale problems, this research investigates both evolutionary and advanced mathematical optimization techniques and seeks a goal of handling models consist of at least 50,000 asset components. To enhance the performance of GAs for large-scale optimization problems, three aspects were considered: (1) examining different problem formulations such as integer, on-shot-binary, and step-wise binary formulation; (2) experimenting with commercial GA-based tools; and (3) introducing an innovative segmentation method to handle groups of smaller size problems, and then integrating the results. To identify the best segmentation method, similarity-based segmentation is compared to random segmentation and was found to have superior performance. Based on the results of numerous experiments with different problem sizes and comparison with previous results obtained by Hegazy and Elhakeem (2010) from the same prototype used in this study, the GAs + Segmentation approach is found to handle a problem size of 50,000 components, with better solution quality (improved optimum solution), and no noticeable degradation of optimization performance by increasing the problems size. In addition to evolutionary algorithms, performance of one of the advanced mathematical programming tools (GAMS), and its powerful optimization engine (CPLEX), are investigated. For the mathematical representation of the asset renewal problem, best formulation is selected with regard to the definitions of easy-to-solve integer programming (IP) formulations. To reduce internal calculations, the GAMS mathematical model is coded to interact with original spreadsheet data by using GAMS data exchange (GDX) files. Based on experimentations, using advanced mathematical tools with strong (easy-to-solve) IP formulations, improved the solution quality even further in compare to GA + Segmentation. In conclusion, this research investigated both evolutionary and advanced mathematical optimization techniques in handling very large-scale asset renewal problems, and introduced effective models for solving such problems. The developed models represent a major innovative step towards achieving large cost savings, optimizing decisions, and justifying fund allocation decisions for infrastructure asset management. While the focus of this research is on educational buildings, the developed optimization models can be adapted to various large-scale asset management problems.