On the Optimal Transmission Strategies for Sources without Channel State Information 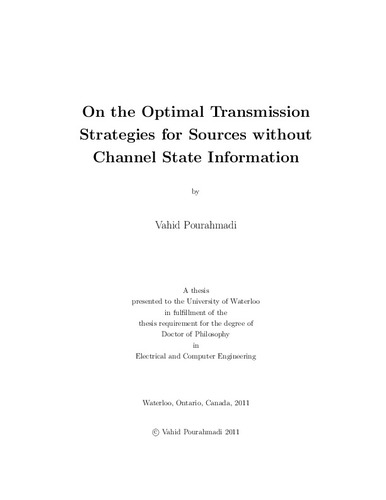 With the growth of multimedia services, it is essential to find new transmission schemes to support higher data rates in wireless networks. In this thesis, we study networks in which the Channel State Information (CSI) is only available at the destination. We focus on the analysis of three different network setups. For each case, we propose a transmission scheme which maximizes the average performance of the network. The first scenario, which is studied in Chapter 2, is a multi-hop network in which the channel gain of each hop changes quasi-statically from one transmission block to the other. Our main motivation to study this network is the recent advances in deployment of relay nodes in wireless networks (e.g., LTE-A and IEEE 802.16j). In this setup, we assume that all nodes are equipped with a single antenna and the relay nodes are not capable of data buffering over multiple transmission blocks. The proposed transmission scheme is based on infinite-layer coding at all nodes (the source and all relays) in conjunction with the Decode-and-Forward DF relaying. The objective is to maximize the statistical average of the received rate per channel use at the destination. To find the optimal parameters of this code, we first formulate the problem for a two-hop scenario and describe the code design algorithm for this two-hop setting. The optimality of infinite-layer DF coding is also discussed for the case of two-hop networks. The result is then generalized to multi-hop scenarios. To show the superiority of the proposed scheme, we also evaluate the achievable average received rate of infinite-layer DF coding and compare it with the performance of previously known schemes. The second scenario, studied in Chapter 3, is a single-hop network in which both nodes are equipped with multiple antennas, while the channel gain changes quasi-statically and the CSI is not available at the source. The main reason for selecting this network setup is to study the transmission of video signals (compressed using a scalable video coding technique, e.g., SVC H.264/AVC) over a Multiple-Input Multiple-Output (MIMO) link. In this setup, although scalable video coding techniques compress the video signal into layers with different importance (for video reconstruction), the source cannot adapt the number of transmitted layers to the capacity of the channel (since it does not have the CSI in each time slot). An alternative approach is to always transmit all layers of the compressed video signal, but use unequal error protection for different layers. With this motivation, we focus on the design of multilayer codes for a MIMO link in which the destination is only able to perform successive decoding (not joint-decoding). In this chapter, we introduce a design rule for construction of multilayer codes for MIMO systems. We also propose a algorithm that uses this design rule to determine the parameters of the multilayer code. The performance analysis of the proposed scheme is also discussed in this chapter. In the two previous scenarios, the ambiguity of the source regarding the channel state comes from the fact that the channel gains randomly change in each transmission block and there is no feedback to notify the source about the current state of the channel. Apart from these, there are some scenarios in which the channel state is unknown at the source, even though the channel gain is fixed and the source knows its value. The third scenario of this thesis presents an example of such network setups. More precisely, in Chapter 4, we study a multiple access network with K users and one Access Point (AP), where all nodes are equipped with multiple antennas. To access the network, each user independently decides whether to transmit in a time slot or not (no coordination between users). Considering a two-user random access network, we first derive the optimal value of network average Degrees of Freedom (DoF) (introduced in Section 4.1). Generalizing the result to multiuser networks, we propose an upper-bound for the network average DoF of a K-user random access network. This upper-bound is then analyzed for different network configurations to identify the network classes in which the proposed upper-bound is tight. It is also shown that simple single-stream data transmission achieves the upper-bound in most network settings. However, for some network configurations, we need to apply multi-stream data transmission in conjunction with interference alignment to reach the upper-bound. Some illustrative examples are also presented in this chapter.