An introduction to Gerber-Shiu analysis 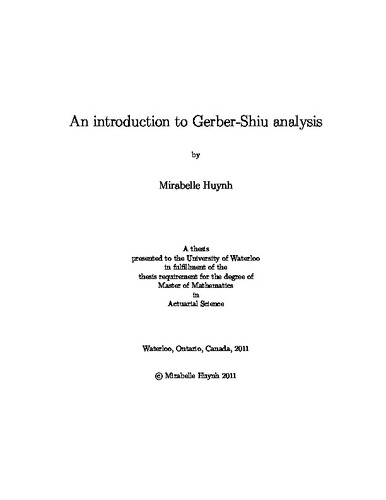 A valuable analytical tool to understand the event of ruin is a Gerber-Shiu discounted penalty function. It acts as a unified means of identifying ruin-related quantities which may help insurers understand their vulnerability ruin. This thesis provides an introduction to the basic concepts and common techniques used for the Gerber-Shiu analysis. Chapter 1 introduces the insurer's surplus process in the ordinary Sparre Andersen model. Defective renewal equations, the Dickson-Hipp transform, and Lundberg's fundamental equation are reviewed. Chapter 2 introduces the classical Gerber-Shiu discounted penalty function. Two framework equations are derived by conditioning on the first drop in surplus below its initial value, and by conditioning on the time and amount of the first claim. A detailed discussion is provided for each of these conditioning arguments. The classical Poisson model (where interclaim times are exponentially distributed) is then considered. We also consider when claim sizes are exponentially distributed. Chapter 3 introduces the Gerber-Shiu function in the delayed renewal model which allows the time until the first claim to be distributed differently than subsequent interclaim times. We determine a functional relationship between the Gerber-Shiu function in the ordinary Sparre Andersen model and the Gerber-Shiu function in the delayed model for a class of first interclaim time densities which includes the equilibrium density for the stationary renewal model, and the exponential density. To conclude, Chapter 4 introduces a generalized Gerber-Shiu function where the penalty function includes two additional random variables: the minimum surplus level before ruin, and the surplus immediately after the claim before the claim causing ruin. This generalized Gerber-Shiu function allows for the study of random variables which otherwise could not be studied using the classical definition of the function. Additionally, it is assumed that the size of a claim is dependant on the interclaim time that precedes it. As is done in Chapter 2, a detailed discussion of each of the two conditioning arguments is provided. Using the uniqueness property of Laplace transforms, the form of joint defective discounted densities of interest are determined. The classical Poisson model and the exponential claim size assumption is also revisited.