Jane Fonda's Antiwar Activism and The Myth of Hanoi Jane 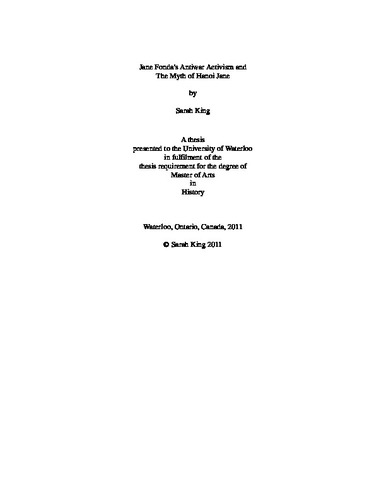 This thesis examines Jane Fonda’s antiwar activism during the Vietnam War, focusing on the period from late 1969 through 1973. Her early activism was characterized by frequent protests against the war, speeches at antiwar rallies and college campuses, and involvement with the organization Vietnam Veterans Against the War. In 1971 Fonda organized an antiwar troupe, FTA, which performed antiwar songs and sketches to active-duty servicemen in America and Southeast Asia. Fonda’s notorious trip to North Vietnam is examined in detail, as are her comments in 1973 regarding American POWs. Negative reaction to Fonda’s activism is examined, and the myth of “Hanoi Jane” is traced from its wartime origins through its postwar evolution. The John Kerry-Jane Fonda photograph incident of 2004 is reviewed, and treated as a symptom of decades-long anti-Hanoi Jane ideas, rather than an isolated incident. Fonda’s gender, the media’s treatment of her at various stages, and her own missteps all receive consideration in determining where Jane Fonda ends and the myth of Hanoi Jane begins.