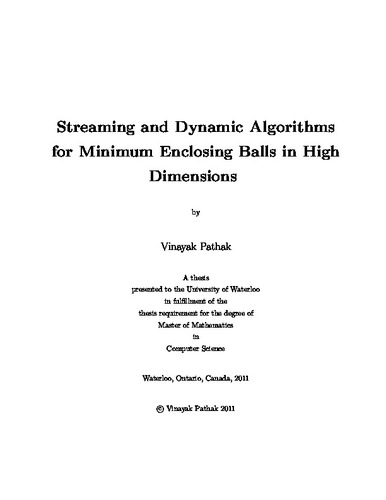 At SODA'10, Agarwal and Sharathkumar presented a streaming algorithm for approximating the minimum enclosing ball of a set of points in d-dimensional Euclidean space. Their algorithm requires one pass, uses O(d) space, and was shown to have approximation factor at most 1.3661. We prove that the same algorithm has approximation factor less than 1.22, which brings us much closer to a 1.207 lower bound given by Agarwal and Sharathkumar. We also apply this technique to the dynamic version of the minimum enclosing ball problem (in the non-streaming setting). We give an O(dn)-space data structure that can maintain a 1.22-approximate minimum enclosing ball in O(dlog n) expected amortized time per insertion/deletion. Finally, we prove that a 1+ϵ approximation to the problem can be found in (0.5+δ)/ϵ passes over the input, for an arbitrarily small constant δ, which is an improvement over the previous result that used 2/ϵ passes.