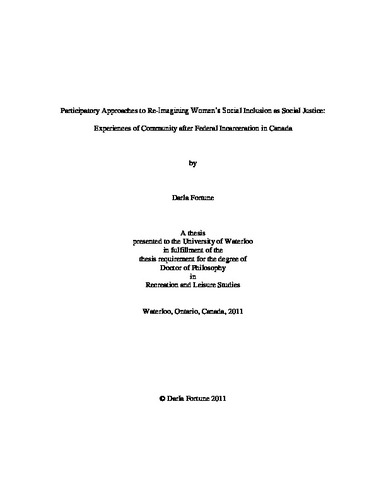 Women who have been incarcerated are disadvantaged in many respects as they enter community (Pedlar, Arai, Yuen, & Fortune, 2008). When putting their lives back together upon release they typically face tremendous hardships which are often intensified by the absence of healthy and supportive relationships (Richie, 2001). Hannah-Moffatt (2000) identified several gender-specific barriers facing women in prison that impede their chances for inclusion once they enter community. Women in prison, she explained, are often poorly educated, unemployed, and many have survived some form of physical or sexual abuse. Furthermore, feelings of guilt, fear, anxiety, and alienation are often compounded when women are apprehended and sentenced. This combination of challenges tends to produce a group of women with low self-esteem who will have difficulty readjusting in the community and are at risk of being socially isolated and excluded (Hannah-Moffatt, 2000; Maidment, 2006; Pollack, 2008). Structural determinants and individual agency both lie at the heart of social inclusion (Dominelli, 2005; Lister, 2000). Often overlooked in the literature is the fact that women who have been incarcerated have agency and possess a capacity to resist, overcome oppression, and counteract exclusion. As I embarked on this research project, an emphasis on women’s capacity was both a starting point and rationale for adopting a participatory approach. Very little is known about how women’s experiences with inclusion or exclusion shape their entry process. Thus, the purpose of this study was to examine inclusion from the perspective of women entering community after release from a federal prison. Using a feminist participatory action research (FPAR) approach guided by anti-oppressive research (AOR) as my theoretical framework, I asked women living in community in a region of southern Ontario and who had been incarcerated to come together to discuss ideas around inclusion and explore ways to foster a more inclusive environment. This research project was rooted in a concern for social justice. Hall (2005) argues that negotiating the discourse of inclusion and exclusion requires a critical re-imagining of inclusion as social justice. Consequently, this study was designed to encourage dialogue and a critical re-imagining of what inclusion means among women entering community after incarceration, with an emphasis on collaborative learning. Plans and strategies were shaped and altered based on decisions of the research team and resulted in the development of three distinct phases of research involving team meetings, individual conversations, and engagement in photovoice. Data explored in each phase of the project, as well as my own reflexive knowledge acquired through ongoing critical self-reflection, provided insight into the complexities of difference, power, and identity. These findings are presented in four chapters beginning with a description of how the FPAR process based on principles of inclusion, participation, action, and social change unfolded. Then, themes were identified which revealed the swings of a FPAR process including: assumptions of collective identity and difference impede inclusion and participation, grappling with tensions around partnerships and power, and negotiating identity and resisting stigma. Findings also explored the contested nature of community and its role in inclusion. This chapter describes the kind of community women experienced before and after incarceration. Themes of feeling pushed out of community, being pulled into community, and negotiating issues of responsibility upon community entry highlight the ambiguous nature of community and social inclusion for women who have broken the law. Deep exclusion experienced by women who have been placed outside of community and sent to prison is arguably unparalleled, and this study was ultimately concerned with society’s tendency to exclude people based on difference. Experiences of inclusion/exclusion are often a result of normative social beliefs that construct difference as “less than” (Moosa-Mitha, 2005). Indeed when difference is viewed negatively, it often results in the exclusion and marginalization of those who are defined as the other (Woodward, 1997). Alternatively, social inclusion involves respect for differences and the removal of barriers to participate in public life (Salojee, 2005). When women in this study felt free to participate in the life of their community in ways that did not undermine their sense of self and their differences they were in the process of being included. Supportive relationships and judgment free spaces seemed to remove pressures for women to conform to dominant expectations of behaviour to gain acceptance. Findings from this study suggest we need to create space for difference and social inclusion to co-exist in community. This space would be one that centres difference, promotes social justice, values different forms and levels of participation, acknowledges that relationships grow and change over time, interrogates taken for granted assumptions of power and privilege, and emphasizes dialoguing through difference.