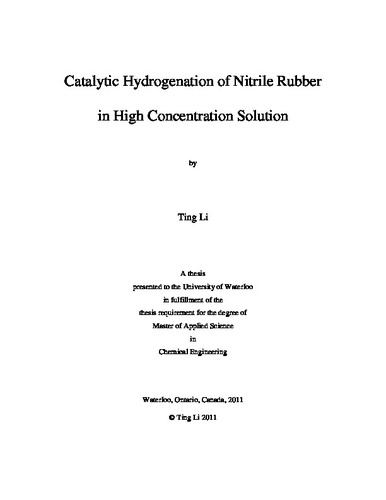 Chemical modification is an important way to improve the properties of existing polymers, and one of the important examples is the hydrogenation of nitrile butadiene rubber (NBR) in organic solvent by homogeneous catalysis in order to extend its application. This process has been industrialized for many years to provide high performance elastomers (HNBR) for the automotive industry, especially those used to produce components in engine compartments. In the current commercial process, a batch reactor is employed for the hydrogenation step, which is labor intensive and not suitable for large volume of production. Thus, novel hydrogenation devices such as a continuous process are being developed in our research group to overcome these drawbacks. In order to make the process more practical for industrial application, high concentration polymer solutions should be targeted for the continuous hydrogenation. However, many problems are encountered due to the viscosity of the high concentration polymer solution, which increases tremendously as the reaction goes on, resulting in severe mass transfer and heat transfer problems. So, hydrogenation kinetics in high concentration NBR solution, as well as the rheological properties of this viscous solution are very essential and fundamental for the design of novel hydrogenation processes and reactor scale up. In the present work, hydrogenation of NBR in high concentration solution was carried out in a batch reactor. A commercial rhodium catalyst, Wilkinson’s catalyst, was used with triphenylphosphine as the co-catalyst and chlorobenzene as the solvent. The reactor was modified and a PID controller was tuned to fit this strong exothermic reaction. It was observed that when NBR solution is in a high concentration the kinetic behavior was greatly affected by mass transfer processes, especially the gas-liquid mass transfer. Reactor internals were designed and various agitators were investigated to improve the mechanical mixing. Experimental results show that the turbine-anchor combined agitator could provide superior mixing for this viscous reaction system. The kinetic behavior of NBR hydrogenation under low catalyst concentration was also studied. It was observed that the hydrogenation degree of the polymer could not reach 95% if less than 0.1%wt catalyst (based on polymer mass) was used, deviating from the behavior under a normal catalyst concentration. The viscosity of the NBR-MCB solutions was measured in a rotational rheometer that has a cylinder sensor under both room conditions and reaction conditions. Parameters that might affect the viscosity of the solutions were studied, especially the hydrogenation degree of polymer. Rheological properties of NBR-MEK solutions, as well as NBR melts were also studied for relevant information. It is concluded that the hydrogenation kinetics deviates from that reported by Parent et al. [6] when polymer is in high concentration and/or catalyst is in low concentration; and that the reaction solution (HNBR/NBR-MCB solution) deviates from Newtonian behavior when polymer concentration and hydrogenation degree are high.