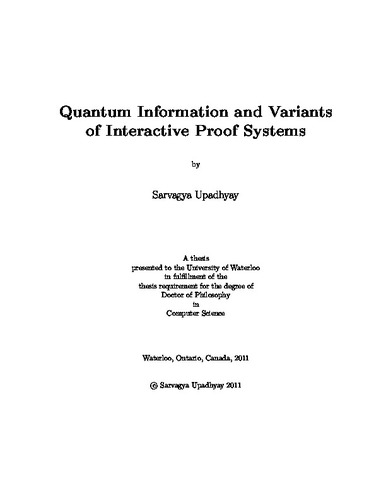 For nearly three decades, the model of interactive proof systems and its variants have been central to many important and exciting developments in computational complexity theory such as exact characterization of some well known complexity classes, development of probabilistically checkable proof systems and theory of hardness of approximation, and formalization of fundamental cryptographic primitives. On the other hand, the theory of quantum information, which is primarily concerned with harnessing quantum mechanical features for algorithmic, cryptographic, and information processing tasks has found many applications. In the past three decades, quantum information has been used to develop unconditionally secure quantum cryptography protocols, efficient quantum algorithms for certain problems that are believed to be intractable in classical world, and communication efficient protocols. In this thesis, we study the impact of quantum information on the models of interactive proof systems and their multi-prover variants. We study various quantum models and explore two questions. The first question we address pertains to the expressive power of such models with or without resource constraints. The second question is related to error reduction technique of such proof systems via parallel repetition. The question related to the expressive power of models of quantum interactive proof systems and their variants lead us to the following results. (1) We show that the expressive power of quantum interactive proof systems is exactly PSPACE, the class of problems that can be solved by a polynomial-space deterministic Turing machines and that also admit a classical interactive proof systems. This result shows that in terms of complexity-theoretic characterization, both the models are equivalent. The result is obtained using an algorithmic technique known as the matrix multiplicative weights update method to solve a semidefinite program that characterizes the success probability of the quantum prover. (2) We show that polynomially many logarithmic-size unentangled quantum proofs are no more powerful than a classical proof if the verifier has the ability to process quantum information. This result follows from an observation that logarithmic-size quantum states can be efficiently represented classically and such classical representation can be used to efficiently generate the quantum state. (3) We also establish that the model of multi-prover quantum Merlin Arthur proof system, where the verifier is only allowed to apply nonadaptive unentangled measurement on each proof and then a quantum circuit on the classical outcomes, is no more powerful than QMA under the restriction that there are only polynomial number of outcomes per proof. This result follows from showing that such proof systems also admit a QMA verification procedure. The question related to error reduction via parallel repetition lead us to following results on a class of two-prover one-round games with quantum provers and a class of multi-prover QMA proof systems. (1) We establish that for a certain class of two-prover one-round games known as XOR games, admit a perfect parallel repetition theorem in the following sense. When the provers play a collection of XOR games, an optimal strategy of the provers is to play each instance of the collection independently and optimally. In particular, the success probability of the quantum provers in the n-fold repetition of an XOR game G with quantum value w(G) is exactly (w(G))^n. (2) We show a parallel repetition theorem for two-prover one-round unique games. More specifically, we prove that if the quantum value of a unique game is 1-e, then the quantum value of n-fold repetition of the game is at most (1-e^2/49)^n. We also establish that for certain class of unique games, the quantum value of the n-fold repetition of the game is at most (1-e/4)^n. For the special case of XOR games, our proof technique gives an alternate proof of result mentioned above. 3. Our final result on parallel repetition is concerned with SepQMA(m) proof systems, where the verifier receives m unentangled quantum proofs and the measurement operator corresponding to outcome "accept" is a fully separable operator. We give an alternate proof of a result of Harrow and Montanaro [HM10] that states that perfect parallel repetition theorem holds for such proof systems. The first two results follow from the duality of semidefinite programs and the final result follows from cone programming duality.