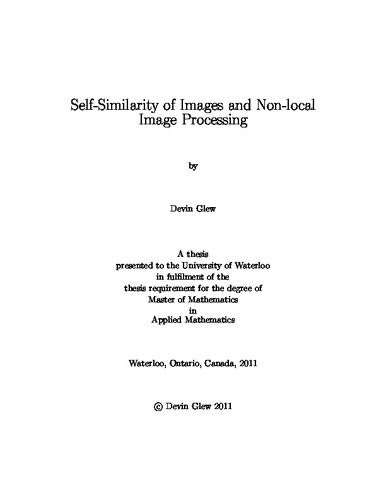 This thesis has two related goals: the first involves the concept of self-similarity of images. Image self-similarity is important because it forms the basis for many imaging techniques such as non-local means denoising and fractal image coding. Research so far has been focused largely on self-similarity in the pixel domain. That is, examining how well different regions in an image mimic each other. Also, most works so far concerning self-similarity have utilized only the mean squared error (MSE). In this thesis, self-similarity is examined in terms of the pixel and wavelet representations of images. In each of these domains, two ways of measuring similarity are considered: the MSE and a relatively new measurement of image fidelity called the Structural Similarity (SSIM) Index. We show that the MSE and SSIM Index give very different answers to the question of how self-similar images really are. The second goal of this thesis involves non-local image processing. First, a generalization of the well known non-local means denoising algorithm is proposed and examined. The groundwork for this generalization is set by the aforementioned results on image self-similarity with respect to the MSE. This new method is then extended to the wavelet representation of images. Experimental results are given to illustrate the applications of these new ideas.