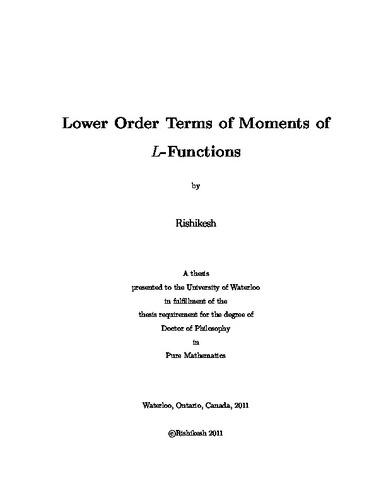 <p>Given a positive integer k, Conrey, Farmer, Keating, Rubinstein and Snaith conjectured a formula for the asymptotics of the k-th moments of the central values of quadratic Dirichlet L-functions. The conjectured formula for the moments is expressed as sum of a k(k+1)/2 degree polynomial in log |d|. In the sum, d varies over the set of fundamental discriminants. This polynomial, called the moment polynomial, is given as a k-fold residue. In Part I of this thesis, we derive explicit formulae for first k lower order terms of the moment polynomial.</p> <p> In Part II, we present a formula bounding the average of S(t,f), the remainder term in the formula for the number of zeros of an L-function, L(s,f), where f is a newform of weight k and level N. This is Turing's method applied to cuspforms. We carry out the improvements to Turing's original method including using techniques of Booker and Trudgian. These improvements have application to the numerical verification of the Riemann Hypothesis.</p>