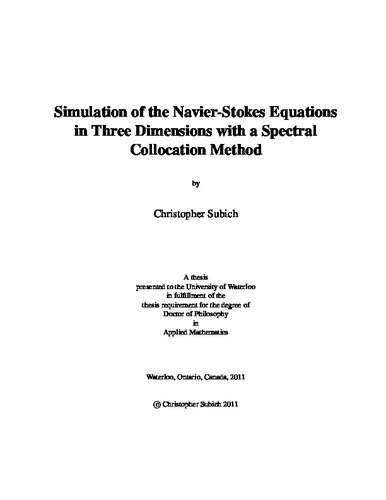 This work develops a nonlinear, three-dimensional spectral collocation method for the simulation of the incompressible Navier-Stokes equations for geophysical and environmental flows. These flows are often driven by the interaction of stratified fluid with topography, which is accurately accounted for in this model using a mapped coordinate system. The spectral collocation method used here evaluates derivatives with a Fourier trigonometric or Chebyshev polynomial expansion as appropriate, and it evaluates the nonlinear terms directly on a collocated grid. The coordinate mapping renders ineffective fast solution methods that rely on separation of variables, so to avoid prohibitively expensive matrix solves this work develops a low-order finite-difference preconditioner for the implicit solution steps. This finite-difference preconditioner is itself too expensive to apply directly, so it is solved pproximately with a geometric multigrid method, using semicoarsening and line relaxation to ensure convergence with locally anisotropic grids. The model is discretized in time with a third-order method developed to allow variable timesteps. This multi-step method explicitly evaluates advective terms and implicitly evaluates pressure and viscous terms. The model’s accuracy is demonstrated with several test cases: growth rates of Kelvin-Helmholtz billows, the interaction of a translating dipole with no-slip boundaries, and the generation of internal waves via topographic interaction. These test cases also illustrate the model’s use from a high-level programming perspective. Additionally, the results of several large-scale simulations are discussed: the three-dimensional dipole/wall interaction, the evolution of internal waves with shear instabilities, and the stability of the bottom boundary layer beneath internal waves. Finally, possible future developments are discussed to extend the model’s capabilities and optimize its performance within the limits of the underlying numerical algorithms.