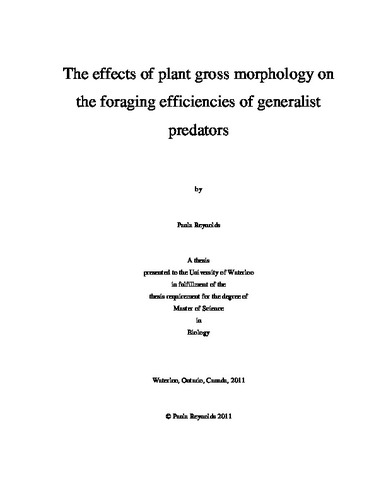 Plant shape affects the ability of insect predators to locate prey by altering search paths or by providing partial refugia for prey. Changes in predator foraging efficiency can have significant consequences for population dynamic of both predators and prey. Yet, the relationship between plants and insect predators is not well understood despite its relevance to agriculture and biological control. The effect of plant gross morphology on predator foraging success was tested using multicoloured Asian ladybeetles, Harmonia axyridis Pallas (Coleoptera: Coccinellidae), and green lacewing larvae, Chrysoperla carnea Stephens (Neuroptera: Chrysopidae), preying on pea aphids, Acyrthosiphon pisum Harris (Hemiptera: Aphididae). These predators differed in body size and therefore might be expected to have different responses to a given plant morphology. Experiments were conducted using four different pea plant morphologies (Pisum sativum L.) that differed in fractal dimension, but which were controlled for surface area. The consumption rate of each predator on each pea morph was determined by measuring the number of aphids consumed in a 48 hour foraging period at 3 prey densities. I also tracked predator search paths using 2D time-lapse photography to determine if the two predators search plants differently. I found that both predators were more successful at capturing prey on plants with a higher leaf edge to leaf area ratio (lower fractal dimension). Plants with more edges were easier for predators to grip, thus increasing their mobility and manoeuvrability. Also, plants with more edges and fewer leaf surfaces had fewer locations where aphids could hide. As a result, predators are more effective at locating and capturing prey on these morphologies.