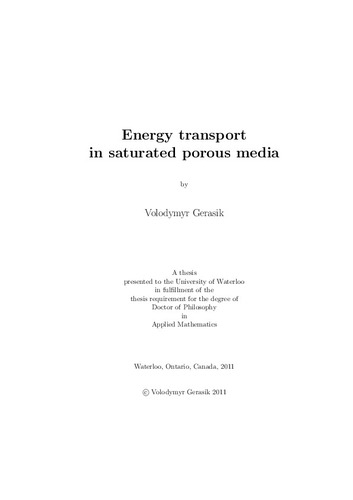 The energy analysis of the wave motion in the Lamb’s problem for a poroelastic half-space in the framework of Biot’s theory is presented. The results for the energy velocity and quality factor of poroelastic waves are revisited. In the case of no dissipation the approach originally established for perfectly elastic media by Miller & Pursey is generalized herein to include poroelastic waves. Special cases of the resonant excitation of the Rayleigh wave and the absence of the Rayleigh wave beyond the cut-off frequency are discussed in detail. Directional diagrams for the volumetric waves are presented. A quantitative picture of the energy partition among the traveling waves is provided for several driving configurations. In the general case of dissipative media the analysis is based on the semi-analytic solution of the Lamb’s problem. In the near field, the surface load generates three wavetrains corresponding to the bulk modes. These wavetrains consist of waves which are longer and exhibit greater viscous attenuation than the corresponding volumetric modes, so that, P1, P2 and S modes emerge from the corresponding wavetrains at a certain distance from the source. For the far field, asymptotic expressions have been obtained and clearly indicate that it is only in the far field that the wave motion represents the superposition of the P1, P2, S and Rayleigh waves characterized by their corresponding wavelengths and attenuations. Moreover, these waves also exhibit geometric attenuation x^3/2 (similar to the waves in a perfectly elastic half-space). To analyze the energy partition the total input power supplied by the source is decomposed into the contributions associated with the wavetrains and the Rayleigh wave. These results provide the means for controlling the excitation of the various wave modes via changes to the driving configuration. Biot’s theory is a particular example of a non-conservative Lagrangian system with a Rayleigh dissipation function. The group velocities of poroelastic waves are complex and do not provide any information about the velocity of the energy transport. Moreover, in general the precise physical meaning of the complex group velocity is unclear. The analysis based on the detailed study of the coupled system of the damped Klein-Gordon equations (Biot’s theory yields such a formalism in the low frequency limit) suggests that both precise and approximate physical interpretations of the complex group velocity are possible. Moreover, these considerations further allow the derivation of exact closed form expressions for the energy velocity and Q factor for both longitudinal and shear poroelastic waves from energy principles. Most notably, the analysis of the resulting expressions reveals that the energy velocity of both longitudinal and shear waves equals (exceeds) the corresponding phase velocity in the case of the low (full) frequency range Biot’s theory. The exact expression for the Q factor contains an additive correction due to viscoelastic interphase interaction in the higher frequency range.