Mechanics and Control of Human Balance 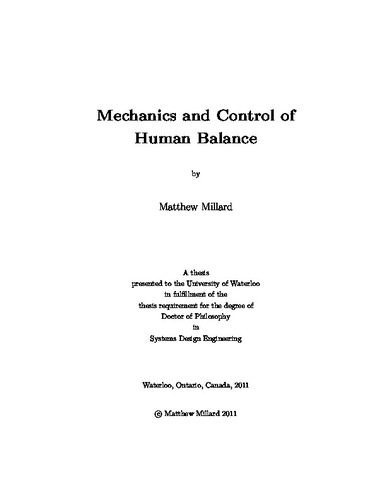 A predictive, forward-dynamic model and computer simulation of human gait has important medical and research applications. Most human simulation work has focused on inverse dynamics studies to quantify bone on bone forces and muscle loads. Inverse dynamics is not predictive - it works backwards from experimentally measured motions in an effort to find the forces that caused the motion. In contrast, forward dynamics determines how a mechanism will move without the need for experimentation. Most of the forward dynamic gait simulations reported consider only one step, foot contact is not modeled, and balance controllers are not used. This thesis addresses a few of the shortcomings of current human gait simulations by contributing an experimentally validated foot contact model, a model-based stance controller, and an experimentally validated model of the relationship between foot placement location and balance. The goal of a predictive human gait simulation is to determine how a human would walk under a condition of interest, such as walking across a slippery floor, using a new lower limb prosthesis, or with reduced leg strength. To achieve this goal, often many different gaits are simulated and the one that is the most human-like is chosen as the prediction for how a person would move. Thus it is necessary to quantify how `human-like' a candidate gait is. Human walking is very efficient, and so, the metabolic efficiency of the candidate gait is most often used to measure the performance of a candidate gait. Muscles consume metabolic energy as a function of the tension they develop and the rate at which they are contracting. Muscle tension is developed, and contractions are made in an effort generate torques about joints in order to make them move. To predict human gait, it is necessary for the simulation to be able to walk in such a way that the simulated leg joints use similar joint torques and kinematics as a human leg does, all while balancing the body. The joint torques that the legs must develop to propel the body forward, and balance it, are heavily influenced by the ground reaction forces developed between the simulated foot and the ground. A predictive gait simulation must be able to control the model so that it can walk, and remain balanced while generating ground reaction force profiles that are similar to experimentally observed human ground reaction force profiles. Ground reaction forces are shaped by the way the foot interacts with the ground, making it very important to model the human foot accurately. Most continuous foot contact models present in the literature have been experimentally validated using pendulum impact methods that have since been shown to produce inaccurate results. The planar foot contact model developed as part of this research was validated in-vivo using conventional force plates and optical tracking markers. The experimental data was also highly useful for developing a computationally efficient foot model by identifying the dominant contact properties of a real foot (during walking), without the complexity of modelling the 26 bones, 33 joints, over 90 ligaments, and the network of muscles that are in a real foot. Both ground reaction forces and the balance of the model are heavily influenced by the way the stance limb is controlled. Anthropomorphic multibody models typically have a fragile sense of balance, and ground reaction force profiles that do not look similar to experimentally measured human ground reaction force profiles. In contrast, the simple point-mass spring-loaded-inverted-pendulum (SLIP) can be made to walk or run in a balanced manner with center-of-mass (COM) kinematics and ground reaction force profiles that could be mistaken for the equivalent human data. A stance limb controller is proposed that uses a planar SLIP to compute a reference trajectory for a planar anthropomorphic multibody gait model. The torso of the anthropomorphic model is made to track the computed trajectory of the SLIP using a control system. The aim of this partitioned approach to gait simulation is to endow the anthropomorphic model with the human-like gait of the simpler SLIP model. Although the SLIP model-based stance-controller allows an anthropomorphic gait model to walk in more human-like manner, it also inherits the short comings of the SLIP model. The SLIP can walk or run like a human, but only at a fixed velocity. It cannot initiate or terminate gait. Fall preventing movements, such as gait termination and compensatory stepping, are of particular relevance to kinesiologists and health care professionals. Kinesiologists have known for nearly a decade that humans restore their balance primarily by systematically altering their foot placement location. This thesis presents a human experimental validation of a planar foot placement algorithm that was originally designed to restore the balance of bipedal robots. A three-dimensional (3D) theoretical extension to the planar foot placement algorithm is also presented along with preliminary human experimental results. These models of foot placement can be used in the future to improve the capabilities of gait simulations by giving simple models human-like compensatory stepping abilities. The theoretical extension also provides some insight into how instability and balance performance can be quantified. The instability and balance performance measures have important applications for diagnosing and rehabilitating balance problems. Despite all of the progress that has been made, there is still much work to be done. Work needs to be continued to find methods that allow the anthropomorphic model to emulate the SLIP model more faithfully. Experimental work needs to be completed to realize the potential diagnostic and rehabilitation applications of the foot placement models. With continued effort, a predictive, balanced, multi-step gait simulation can be developed that will give researchers the time-saving capability of computerized hypothesis testing, and medical professionals improved diagnostic and rehabilitation methods.