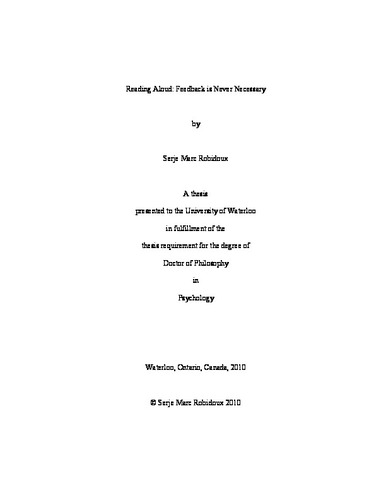 Since McClelland and Rumelhart (1981) introduced the concept of interactive activation (IA) to the field of visual word recognition, IA has been adopted by all of the major theoretical models of reading aloud. This widespread adoption of IA has not been met with a close examination of the need for the principle features of this processing approach. In particular, IA assumes feedback from later processing modules to earlier processing modules. Though there exist data that can be explained by such feedback mechanisms, and indeed IA may be an intuitive approach to complex tasks like reading, little effort has been made to explain these same phenomena without feedback. In the present study I apply Occam’s razor to the most successful model of reading aloud (CDP+; Perry, Ziegler, & Zorzi, 2007) and test whether feedback is needed to simulate any of the benchmark phenomena identified by Perry et al. (2007) and Coltheart, Rastle, Perry, Langdon and Ziegler (2001). I find that the data currently do not require any feedback mechanisms in reading aloud, and thus conclude that modelers in reading aloud have been too quick to adopt the principles of IA.