Chaos synchronization and its application to secure communication 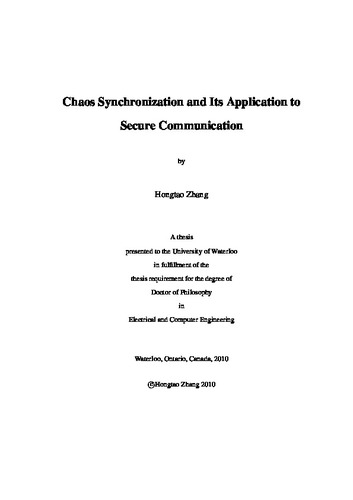 Chaos theory is well known as one of three revolutions in physical sciences in 20th-century, as one physicist called it: Relativity eliminated the Newtonian illusion of absolute space and time; quantum theory eliminated the Newtonian dream of a controllable measurable process; and chaos eliminates the Laplacian fantasy of deterministic predictability". Specially, when chaos synchronization was found in 1991, chaos theory becomes more and more attractive. Chaos has been widely applied to many scientific disciplines: mathematics, programming, microbiology, biology, computer science, economics, engineering, finance, philosophy, physics, politics, population dynamics, psychology, and robotics. One of most important engineering applications is secure communication because of the properties of random behaviours and sensitivity to initial conditions of chaos systems. Noise-like dynamical behaviours can be used to mask the original information in symmetric cryptography. Sensitivity to initial conditions and unpredictability make chaotic systems very suitable to construct one-way function in public-key cryptography. In chaos-based secure communication schemes, information signals are masked or modulated (encrypted) by chaotic signals at the transmitter and the resulting encrypted signals are sent to the corresponding receiver across a public channel (unsafe channel). Perfect chaos synchronization is usually expected to recover the original information signals. In other words, the recovery of the information signals requires the receiver's own copy of the chaotic signals which are synchronized with the transmitter ones. Thus, chaos synchronization is the key technique throughout this whole process. Due to the difficulties of generating and synchronizing chaotic systems and the limit of digital computer precision, there exist many challenges in chaos-based secure communication. In this thesis, we try to solve chaos generation and chaos synchronization problems. Starting from designing chaotic and hyperchaotic system by first-order delay differential equation, we present a family of novel cell attractors with multiple positive Lyapunov exponents. Compared with previously reported hyperchaos systems with complex mathematic structure (more than 3 dimensions), our system is relatively simple while its dynamical behaviours are very complicated. We present a systemic parameter control method to adjust the number of positive Lyapunov exponents, which is an index of chaos degree. Furthermore, we develop a delay feedback controller and apply it to Chen system to generate multi-scroll attractors. It can be generalized to Chua system, Lorenz system, Jerk equation, etc. Since chaos synchronization is the critical technique in chaos-based secure communication, we present corresponding impulsive synchronization criteria to guarantee that the receiver can generate the same chaotic signals at the receiver when time delay and uncertainty emerge in the transmission process. Aiming at the weakness of general impulsive synchronization scheme, i.e., there always exists an upper boundary to limit impulsive intervals during the synchronization process, we design a novel synchronization scheme, intermittent impulsive synchronization scheme (IISS). IISS can not only be flexibly applied to the scenario where the control window is restricted but also improve the security of chaos-based secure communication via reducing the control window width and decreasing the redundancy of synchronization signals. Finally, we propose chaos-based public-key cryptography algorithms which can be used to encrypt synchronization signals and guarantee their security across the public channel.